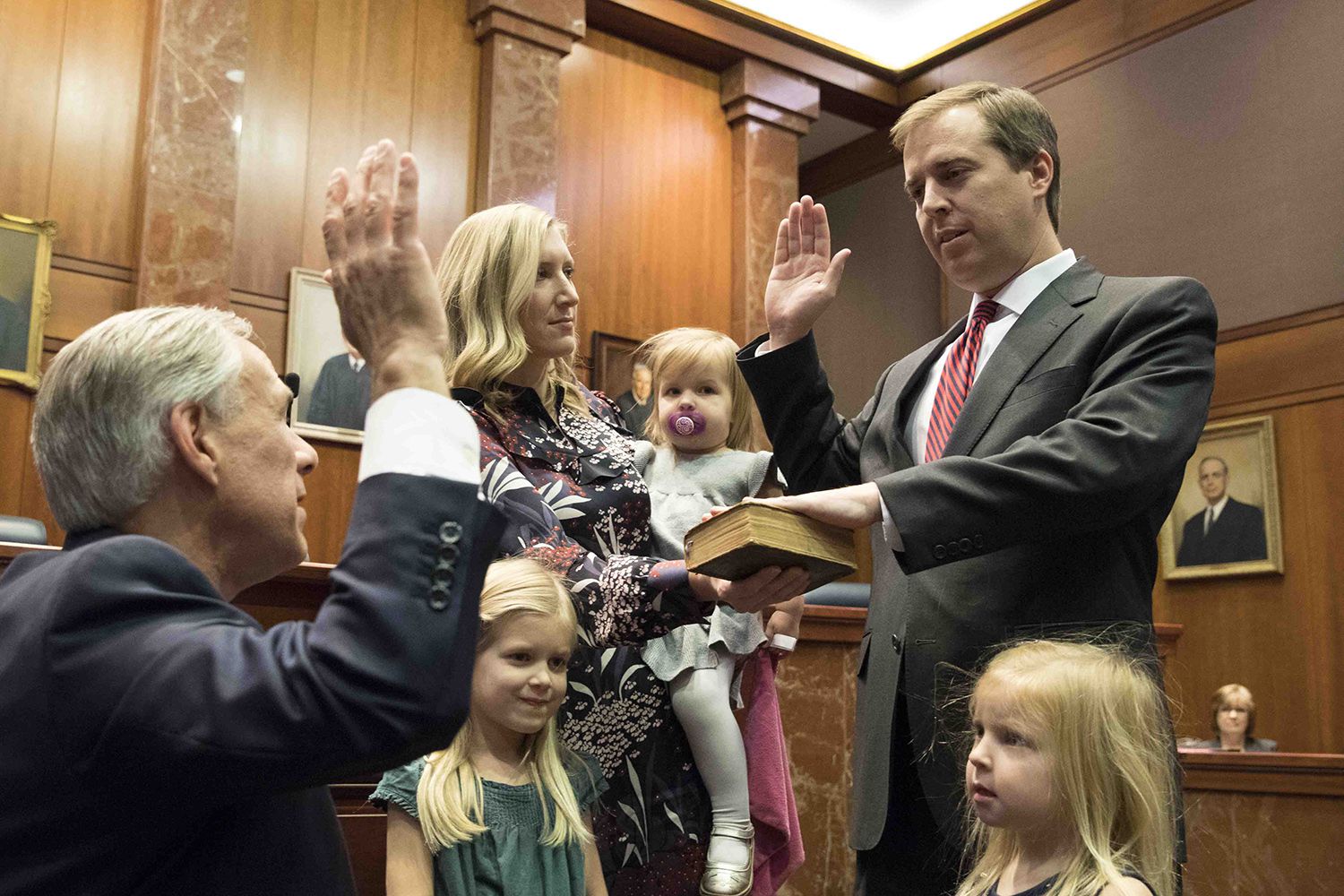 Jimmy Blacklock is new to this — so new that the card outside his Texas Supreme Court office still has the old occupant's name on it; so new that his extensive collection of law books has yet to completely fill the wood shelves of his sunny office on the Capitol grounds; so new that the velcro hanging strips stuck on his walls don't yet bear decorations.

Blacklock, 37, has experience with the law — he boasts stints in the U.S. Department of Justice’s Civil Rights Division, the state attorney general's office and as general counsel to Republican Gov. Greg Abbott — but 2018 marks the first year he'll sit on the bench. It will also be his first time running a campaign, at least since his successful bid to lead the Yale Law Republicans (an uncontested race, as he recalls).

Abbott appointed Blacklock to the state Supreme Court last month to fill a seat vacated by former Justice Don Willett, who left the state court to join the 5th U.S. Circuit Court of Appeals. Willett’s term expires at the end of this year, thrusting Blacklock immediately into a partisan campaign to keep the new post.

In that race, he’ll have to walk a familiar but ill-defined line, one his predecessors have become accustomed to treading. On the bench, he’ll be expected to serve as an impartial arbiter of justice — but on the side, he'll have to wage a partisan campaign to keep his seat in an increasingly polarized state.

Abbott gave him considerable room for error by selecting — and expressing his strong support for — Blacklock just before the filing deadline for the 2018 elections. That helped keep the field clear of Republican primary challengers, including one who had initially announced plans to run upon Willett's confirmation.

But Blacklock's long-term future still requires a delicate balance that all judges in Texas must strike. Lean your weight too far on one side of that line and you risk your prized impartiality, or at least the appearance of it; fall off toward the other and you could fall out of favor with the Republican base.

While working for Abbott, Blacklock fought on behalf of Texas leadership on many of the state’s most divisive partisan issues, including abortion, same-sex marriage and the Affordable Care Act. Now, he says he’s ready to transition from advocate to arbiter.

“Most everybody who comes to the bench having been a lawyer has worked on all kinds of issues and advocated for all kinds of clients,” Blacklock said in an interview last week. “When you take that hat off and put on the judicial robe, you swear a solemn oath to the Constitution, to perform that role fairly and impartially — to look only to the laws and the Constitution.”

But Blacklock has already put toes on either side of that line. On his website, he touts his “conservative record” advocating for the "right to life," the Second Amendment and religious liberty. He also pledges to “never exceed the limited role assigned to the judiciary” and to take each case on its merits “accurately and impartially.”

In the last several days, Blacklock's website has undergone numerous changes, including the removal of phrases like "lifelong conservative Republican" and "Republican from a young age," as well as references to his work as a Republican precinct chairman and election judge. A page titled "Jimmy's Conservative Record" — a link that used to appear on his website's home page — is no longer prominently featured, though the page remains live.

Blacklock said Monday that he and his staff "just needed to simplify and streamline the website."

And while Abbott is helping him politically, Blacklock's old boss isn't helping him project impartiality. Last month, Blacklock joined Abbott at the annual Texas Rally For Life, where the newly-minted justice’s presence was unusual, although not unheard of. More striking were the governor’s remarks about his appointee.

Abbott had already praised Blacklock as something of a known quantity. In November, he said,  “I wanted to make sure that the person I appointed was going to make decisions that I know how they are going to decide.” But before a crowd of several thousand in Austin, the governor added specificity to that praise.

“I don’t have to guess or wonder how Justice Blacklock is going to decide cases because of his proven record of fighting for pro-life causes,” Abbott said.

That was a disturbing statement for some lawyers, legal ethicists and judges — especially given Abbott's past as a Texas Supreme Court justice himself. The Texas Supreme Court rarely hears abortion-related cases. Even so, any indication that a judge has pre-decided an outcome could cross a bright legal line.

“The governor should know better. The governor is essentially saying: ‘Let me tell you, this guy will always rule in a certain way,’” said James Alfini, the former dean of South Texas College of Law Houston and the co-author of "Judicial Conduct and Ethics," a guide for judges. “And that’s wrong. Just plain wrong. He’s basically destroyed any image of impartiality on that issue that he might have.”

In his undecorated office last week, Blacklock walked those statements back on behalf of his mentor.

“What I take the governor to mean — what I know he means — is that, because I worked for him for many years, he is confident that I mean what I say when I talk about my judicial philosophy,” Blacklock said. “I will be the kind of judge who looks only to the text of the Constitution and the text of the laws, and does not go beyond that to impose my own personal views on these cases.”

Blacklock's difficult position is nothing new. Partisan judicial elections in Texas have long drawn criticism, with some of the harshest words coming from former and sitting justices themselves. Texas is one of just seven states that elects Supreme Court justices in partisan races.

In recent years, there have been several legal and legislative challenges to the current system. Just this week, a case went to trial in federal court over the issue, questioning whether the statewide system of judicial elections dilutes the voting power of Texas Latinos.

Nathan Hecht, the state Supreme Court’s current chief justice, criticized partisan elections in his 2017 State of the Judiciary speech, saying “judicial independence is the casualty” of an increasingly harsh political climate. And Willett, Blacklock’s predecessor, was one of the most vocal critics.

“Our imperfect system requires judicial candidates to put on their game face, get over their delicate sensibilities, and run unabashedly the way Texas law defines them: as politicians,” Willett told the San Antonio Express-News in 2012. He added that “how you run should never impact how you rule.”

But even Willett ran explicitly partisan campaigns. In a 2012 campaign ad, Willett touted his reputation as the state’s “most conservative justice” and “the judicial remedy to Obamacare.” He also said he “fought the liberals” who wanted to remove the words “under God” from the Pledge of Allegiance.

Blacklock wouldn’t weigh in on the system of partisan elections — when asked, he chewed on his words carefully and highlighted the need to balance judicial independence with accountability to voters.

“This is the system we have in our Constitution,” he said.

Whatever he thinks of that method, it will shape his work off the court — and he'll be expected to keep it from affecting his work on the court.

“The main challenge is balancing the important work of the court with the demands of the campaign,” Blacklock said. “I swore an oath to preserve, protect and defend the Constitution by applying the law to these cases to the best of my ability. That has to be my primary focus at all times — even though I’m running for office.”

“It doesn’t leave time for hanging things on the walls,” he said with a laugh.