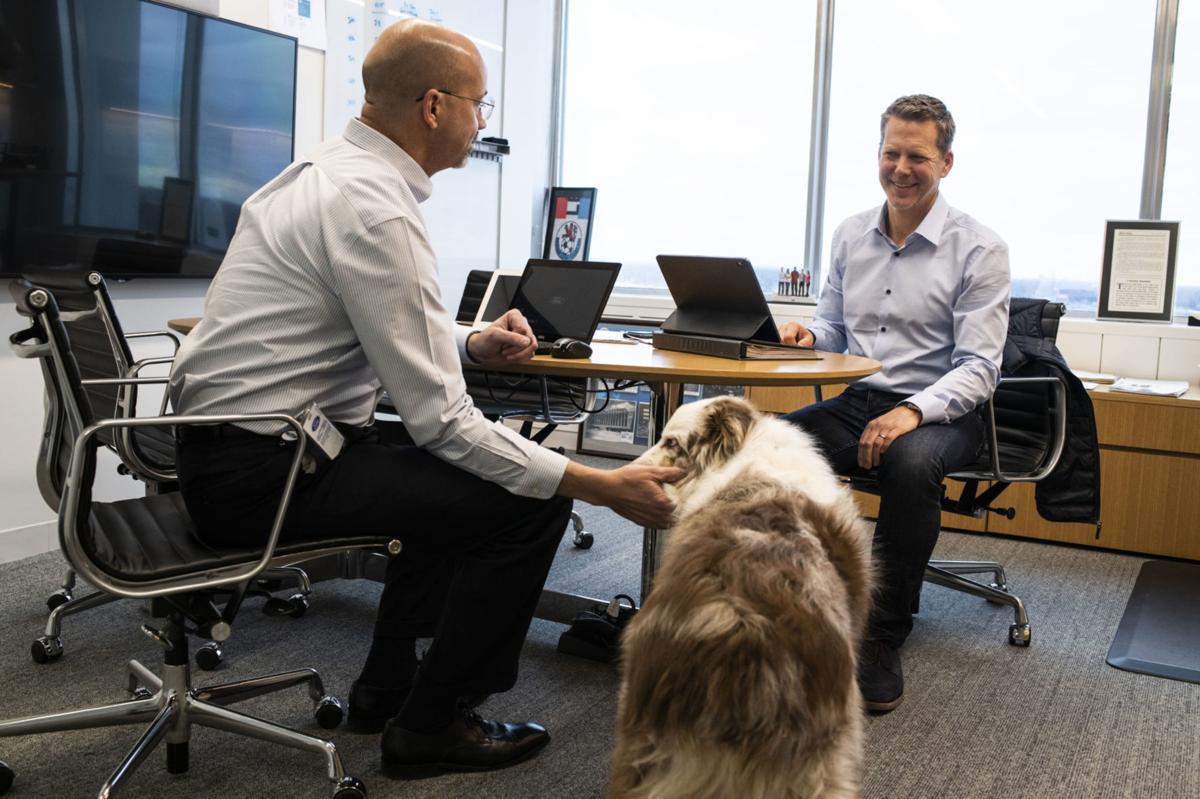 Finley, the dog of Tim Stone, the chief finance officer of Ford Motor Co., is pet by a colleague during a meeting in Dearborn, Mich., on Dec. 5, 2019. 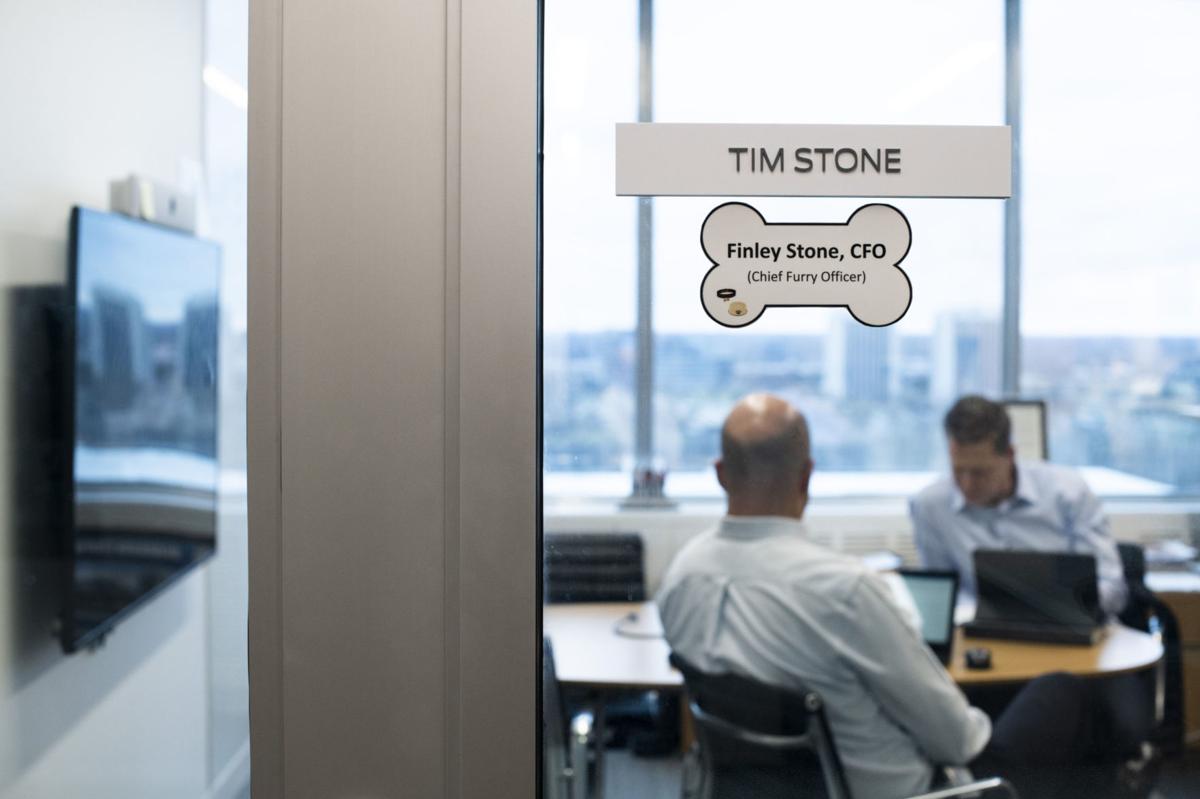 A title for Tim Stone, chief finance officer of Ford Motor Co., and his dog, Finley, hangs outside Stone's office in Dearborn, Mich., on Dec. 5, 2019. 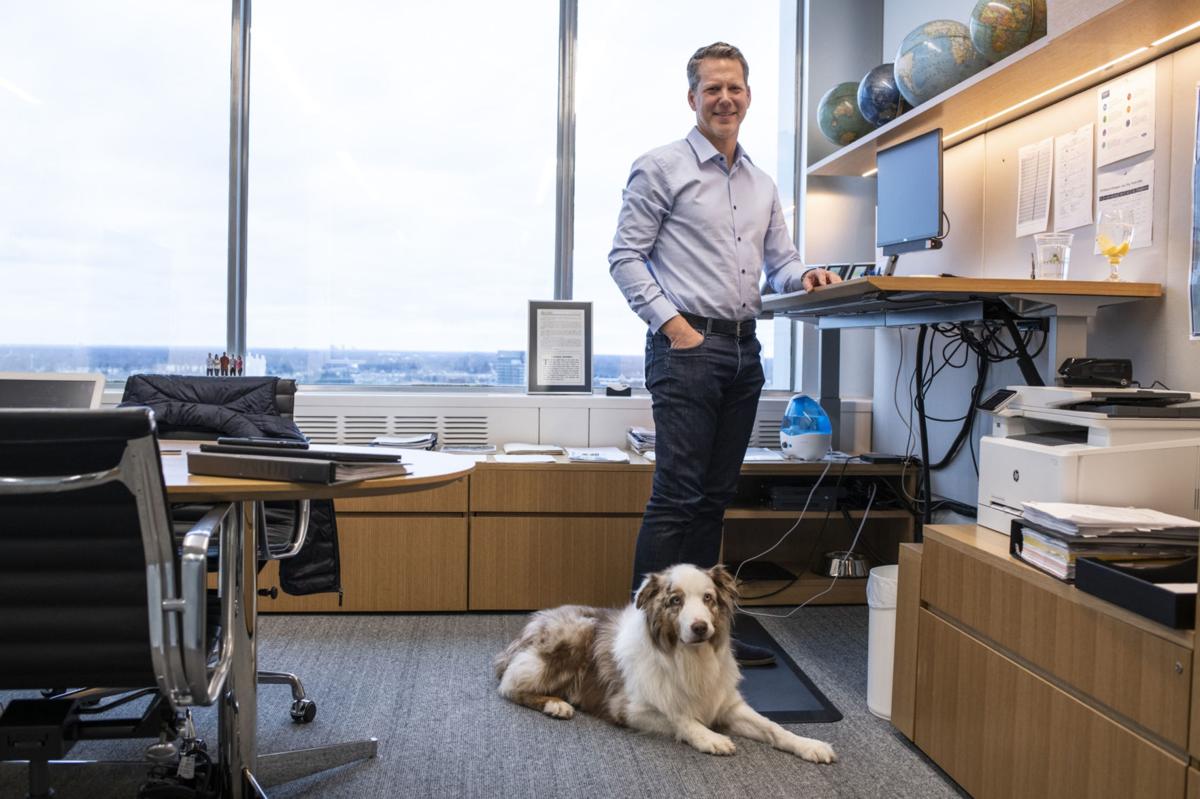 Tim Stone, chief finance officer of Ford Motor Co., and his dog Findley stand for a portrait in Dearborn, Mich., on Dec. 5, 2019.

Finley, the dog of Tim Stone, the chief finance officer of Ford Motor Co., is pet by a colleague during a meeting in Dearborn, Mich., on Dec. 5, 2019.

A title for Tim Stone, chief finance officer of Ford Motor Co., and his dog, Finley, hangs outside Stone's office in Dearborn, Mich., on Dec. 5, 2019.

Tim Stone, chief finance officer of Ford Motor Co., and his dog Findley stand for a portrait in Dearborn, Mich., on Dec. 5, 2019.

This year when Ford went outside the company for the first time in 70 years to hire a chief financial officer, he came with an impressive pedigree - a resume that included top jobs at Amazon and Snap. He also came with a pedigreed sidekick: a chief furry officer.

Wander past Tim Stone's glass-walled office on the 12th floor of Ford's world headquarters on any given day and lying at his feet is his lively, 7-year-old Australian shepherd, Finley, who has his own name badge and sly "CFO" title bestowed by his owner.

No, Ford hasn't gone to the dogs, but one has breached the executive suite.

"He's got a very clear job description, which is: Spirits high and stress low," Stone explained to a group of Bloomberg editors recently in New York. "And he kills it every day!"

Finley is more than just a good boy. He is the C-suite mascot for a pilot program offered to 1,300 office employees at Ford allowing them to bring their dogs to work. It's part of a larger effort by Ford to attract hard-to-get tech talent to the Motor City. Other worker-friendly initiatives include a less hierarchical campus redesign and converting an abandoned train station in a rapidly gentrifying district of downtown Detroit into a modern office space.

There's even a ranking of the most dog-friendly companies by a Seattle-based pet-service company, appropriately named Rover. The list is loaded with West Coast companies, while there are precious few Midwestern firms, and zero automakers.

Atop the list is Amazon, which has 7,000 registered dogs, giving it a human-to-hound ratio of 7-to-1. On its Seattle campus, the online retail giant offers doggy day care, grooming and canine lunch options at Just Food for Dogs and Puddles Barkery.

One of those Amazon-approved pooches used to be Finley. His leash-holder, Stone, 52, spent two decades at Amazon, rising to vice president of finance. When he started at Ford in April, he didn't think twice about bringing his furry friend to the conservative confines of Ford's headquarters building known for decades as the "Glass House."

"It's been a cultural change," Stone said. "I was the first one to bring my dog in every day and when you start doing that, the tone from the top matters."

Part of Stone's mission at Ford is to challenge convention as the company works through a wrenching $11 billion restructuring and embraces electric and self-driving cars. And his canine deputy helps push people outside their comfort zone.

"It makes meeting dialogues different," Stone said. "When you've got a dog in the room, it just makes it easier."

Finley also is helping Stone make more friends at his new employer by breaking down barriers at the 116-year-old auto company known for its pinstriped pecking order.

"People know the dog far more than they know me," Stone joked. "It makes the CFO more approachable. It's amazing how many people I run into and they're like, 'Oh, you have a great dog!'"

Ford's pooch policy is still in the puppy phase. A spokesman emphasized that it remains experimental and dogs aren't allowed in common areas, like cafeterias and conference rooms. There are no doggy day care or bowls of treats doled out by receptionists, as at Amazon.

"It totally changed the dynamic in so many ways," he said. "It just relaxes everybody."