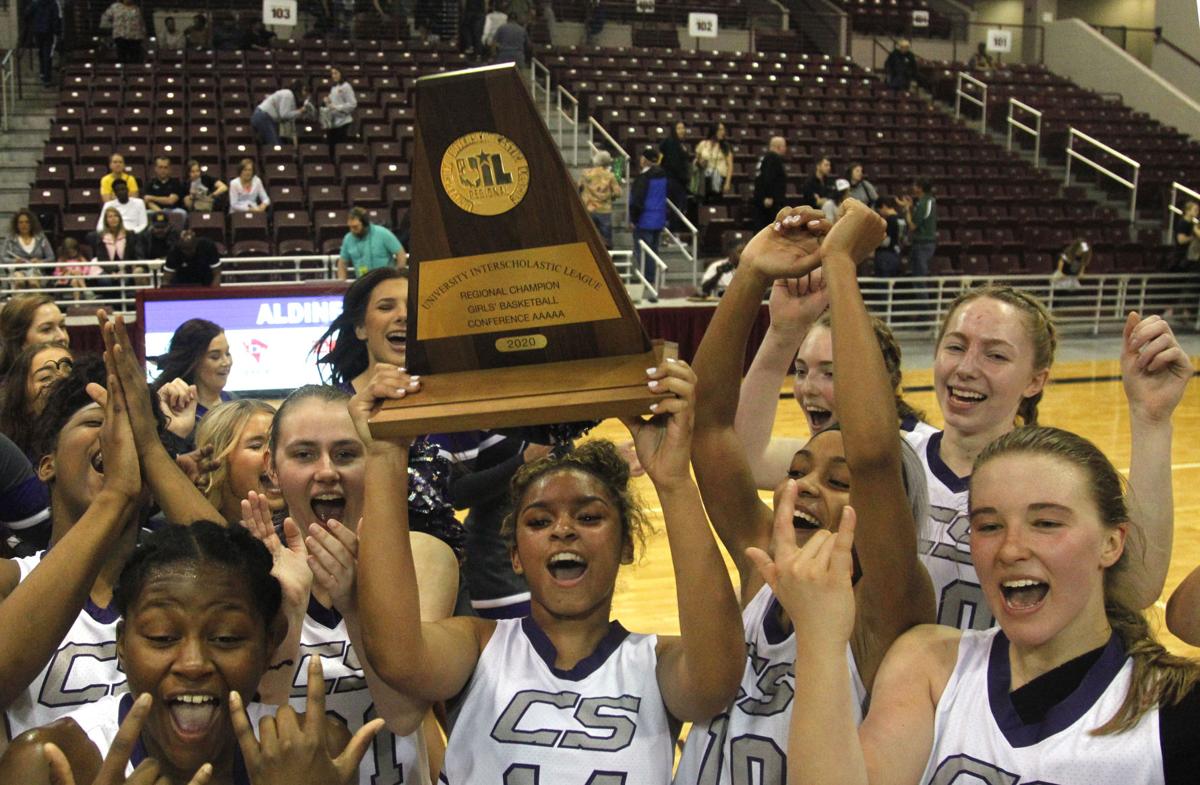 The College Station Lady Cougars celebrate after defeating Cedar Park during the UIL Regional Final Basketball playoff at the M.O. Campbell Center in Aldine on Saturday February 29, 2020. (photo by Patric Schneider / for the Eagle) 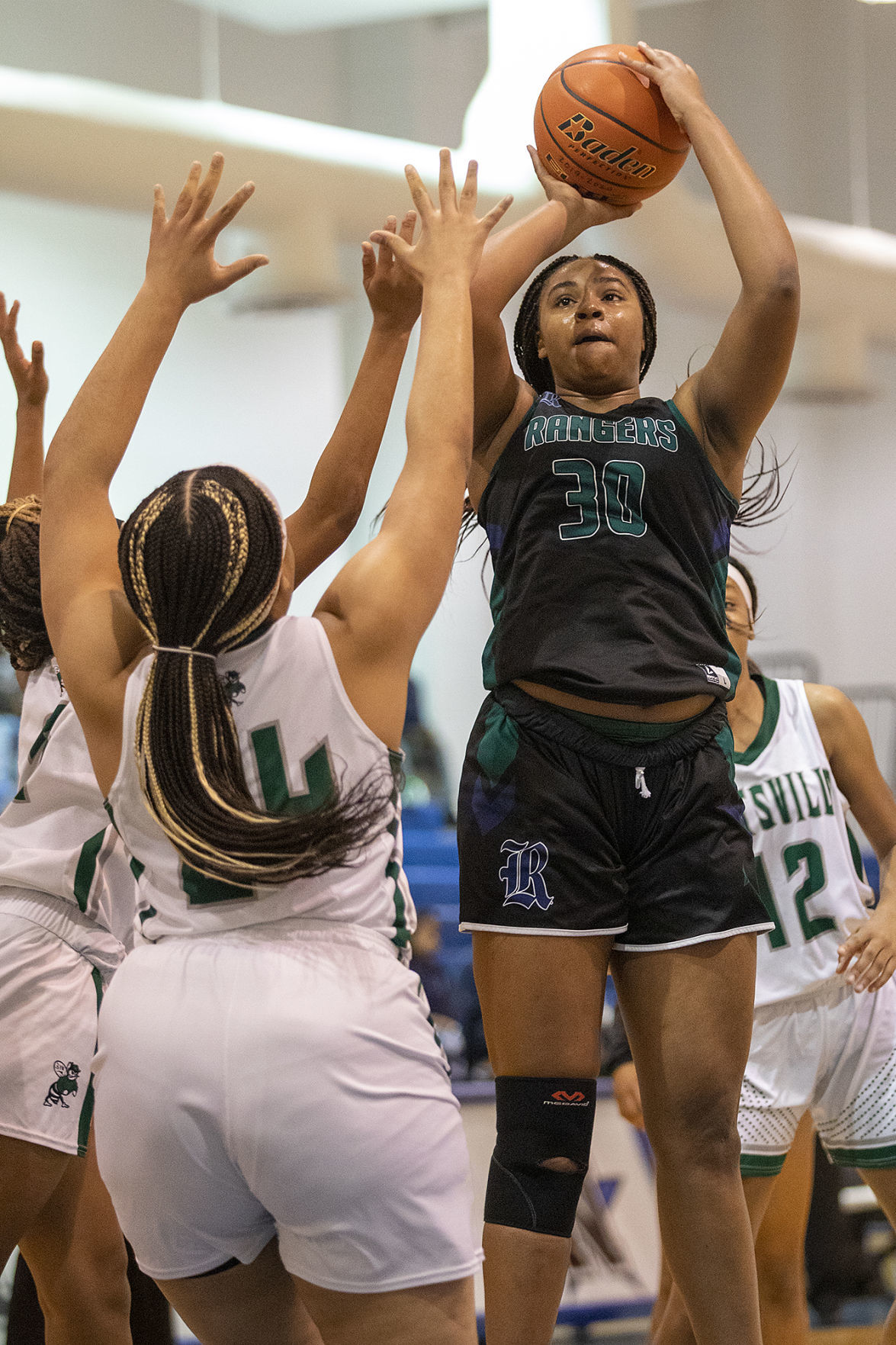 The College Station Lady Cougars celebrate after defeating Cedar Park during the UIL Regional Final Basketball playoff at the M.O. Campbell Center in Aldine on Saturday February 29, 2020. (photo by Patric Schneider / for the Eagle)

There’s a purple flair to The Eagle’s 2020 All-Brazos Valley Girls Basketball Team — and for good reason.

College Station went 32-8 and made its first state tournament berth, a run years in the making that was preceded by its first regional tournament appearance last season. The Lady Cougars nearly broke through to the Class 5A state championship game, losing in the semifinals to eventual champion Frisco Liberty in overtime after leading for most of the game. Despite the heartbreaking ending, College Station’s season to remember garnered plenty of recognition on the All-Brazos Valley team.

Four Lady Cougars are honored on this year’s team, including TGCA 5A/6A Coach of the Year Megan Symank, who is The Eagle’s pick for coach of the year for the second straight season.

Franklin reached the 3A Region III title game for the second straight season and met the same end against the same team, suffering a 59-49 loss to state finalist Woodville. Seniors Ciara Wade and Mya Booker were instrumental in the Lady Lions’ 34-7 season, and both made the first team.

Rudder made it to the third round before falling to 19-5A foe College Station in the fourth meeting between the teams. Rudder went 29-8, with three of those losses coming to the Lady Cougars, and the Lady Rangers are represented on the first team by senior post Deondra Young and the third team by junior guard Tianna Mathis. Both are repeat selections.

Also in 19-5A, A&M Consolidated muscled its way through a tough district to make its first playoff appearance since 2016, led by senior guard Mariya Scott, who earned a second-team nod.

Hearne junior guard Jenny Johnson is a repeat pick on the first team, and Snook junior guard Jaycie Brisco and Centerville senior center Hannah Matthews are on the second team for the second straight season.

Coach of the Year

The McClennan College signee and 19-3A MVP led Franklin to the 2A Region III final and 34-7 record, averaging 14 ppg, 8 rpg, 7 apg and 5 spg to earn TGCA and TABC all-state honors.

Mason was named 23-3A MVP as a sophomore after scoring 16 ppg, including 20 ppg in district and postseason play, to go with 15 rebounds, 5 steals and 4 assists per game.

Wade averaged 17 points and 10 rebounds per game and sank 68 3-pointers for the Lady Lions and was named TGCA all-state and TABC all-region.

The two-time 26-2A MVP led the Lady Jays to a 31-6 record and a fourth straight district title, earning all-state honors from TABC and TGCA after averaging 14 points, 6 rebounds, 4 assists and 4 steals.

The Hill Junior College signee scored 18 ppg to go with 4.7 apg and 4 spg to lead the Lady Tigers back to the playoffs. Scott was named to the TGCA all-state team.

Rivers led a stellar Lady Cougar defense to claim 19-5A defensive player of the year and help College Station to its first state tournament. She averaged 10.5 ppg and 4.5 rpg and was named TGCA and TABC all-state.

The 20-2A offensive player of the year was a force in the paint, averaging 15 points, 12 rebounds and 2.5 blocks per game in a stellar senior campaign.

The TGCA all-state sharpshooter scored 12.5 points per game to go with 4.9 rebounds and played a key role on the Lady Cougars’ state tournament team.

Johnson was College Station’s leading scorer at 14.1 points per game, including a game-high 20 in the regional final, and was named to the TABC all-region team.

Rudder’s point guard missed the playoffs with an injury, but she averaged 12.1 points and 4.0 assists per game as the catalyst of the Lady Rangers’ up-tempo style.

Jackson had a stellar first season with Hearne, averaging 12.2 points, 8.2 rebounds and 2.6 steals per game, and was named 25-2A newcomer of the year.

College Station’s senior gymnasts Kalyn Dujka and Katelyn Kolodziejczyk have known each other since fifth grade. The duo has been through inju…

With the University Interscholastic League athletics schedule in a holding pattern in response to the COVID-19 pandemic, baseball and softball…