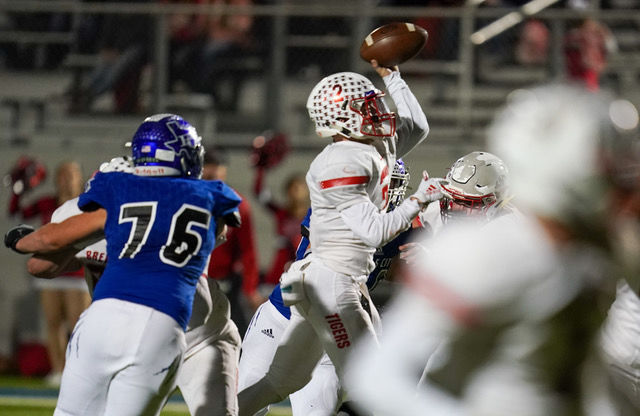 Bremond quarterback Seth Kasowski throws a touchdown pass during the first half against No. 1 Falls City on Friday.

PFLUGERVILLE — When Bremond senior JT Anthony turned a desperation lateral into a 61-yard touchdown run late in the fourth quarter, it looked like the Tigers were on to something special.

And the comeback seemed destined when the ensuing onside kick attempt bounced off a Falls City player.

But another Beaver, Cody Arrisola, recovered the loose ball to help top-ranked Falls City preserve a 35-28 win over Bremond in the Class 2A Division II state quarterfinals on Friday at The Pfield.

Falls City (13-1) advances to play Mart in the state semifinals for the second straight season. Bremond ends its season at 12-2.

“[Javier Roson] kicked it perfect, and … I really thought we were going to get it,” Bremond head coach Jeff Kasowski said of the onside kick.

It was the last of several key plays Falls City made in the second half to overcome a 14-7 halftime deficit. The Tigers limited the ground-and-pound Beavers in the first half, holding senior running back Brady Lyssy to 6.2 yards per carry, well below his 10.5 average entering the game.

Lyssy and his big offensive line took over in the second half as the all-state runner cut upfield on the first snap of the third quarter for a 67-yard touchdown run to tie the game. Lyssy finished with 353 yards and five touchdowns on 45 carries, including 216 yards and four scores in the second half.

“Bremond did a great job of slanting on the direction we were running all game, especially in the first half,” Lyssy said. “We made our adjustments in the second half. When I saw that [hole in the third quarter], I knew it was on ... and I saw new life for this team.”

After Falls City forced a turnover on downs, Lyssy carried on both plays of the next drive, capping it with a 37-yard touchdown run to give Falls City a 20-14 lead with 9:55 left in the third quarter.

Bremond responded quickly, marching 58 yards on seven plays to grab a 21-20 lead on a 1-yard touchdown run by Anthony, who rushed for 109 yards on 15 carries. Quarterback Seth Kasowski completed all four of his passes on the drive, part of his 16-for-16 stretch to open the game.

But it was a pass play by Falls City that turned the tide late in the third quarter. Facing a fourth-and-11 from the Bremond 19-yard line, the Beavers ran a double-reverse pass that quarterback Jaxson Pipes completed to Wesley Molina, who grabbed the ball in tight coverage at the Bremond 1. Lyssy gave the Beavers a 28-21 lead with a 1-yard TD plunge and converting the two-point run.

Bremond drove deep into Falls City territory on the ensuing drive, but Falls City’s Grant Jendrusch intercepted a Tiger pass in the end zone. The Tigers forced a punt, but Anthony’s run on fourth-and-2 got stopped short in Bremond territory, allowing the Beavers to take a 35-21 lead on a 1-yard TD run by Lyssy with 3:34 left in the game.

“We made enough plays defensively to have won the football game,” Jeff Kasowski said. “The difference was they made some plays in the second half that made it a little tougher on us trying to throw the football. We were still able to make some plays but not as many. Hats off to them for that.”

Seth Kasowski completed 19 of 23 passes for 212 yards and a pair of touchdowns to Dalton Wilganowski, who had 10 catches for 110 yards. Casey Garrett added three catches for 83 yards.

The Tigers started slowly, taking the ball to start the game and going three-and-out, and Falls City capitalized with a nine-play, 55-yard touchdown drive capped by a 13-yard run around right end from Lyssy.

It appeared Bremond turned it over on its next drive when Kasowski’s pass fell incomplete on fourth-and-6, but a roughing the passer penalty, coupled with a waved-off flag for an ineligible receiver, set up the Tigers at the Falls City 25. Three plays later, Kasowski hit Wilganowski over the middle for a 20-yard touchdown to tie the game with 3:20 left in the first.

After several drives of dominant defensive play, Falls City drove into Bremond territory late in the first half, but Wilganowski stuffed Lyssy on fourth-and-2, forcing a fumble as the Tigers took over at their own 34 with 3:10 left.

Kasowski quickly moved Bremond down field, completing a 16-yard pass to Wilganowski and a 36-yard pass down the left sideline to Garrett. Kasowski found Wilganowski again three plays later for a 15-yard touchdown up the middle to give the Tigers a 14-7 lead with 1:10 left in the half.

Falls City mounted its longest drive of the game, with Lyssy breaking off runs of 14, 12 and 24 yards to get the Beavers to the Bremond 17 with 29 seconds left in the half. But Kasowski broke up Lyssy’s fourth-down pass to the end zone to preserve the Tigers’ halftime lead.