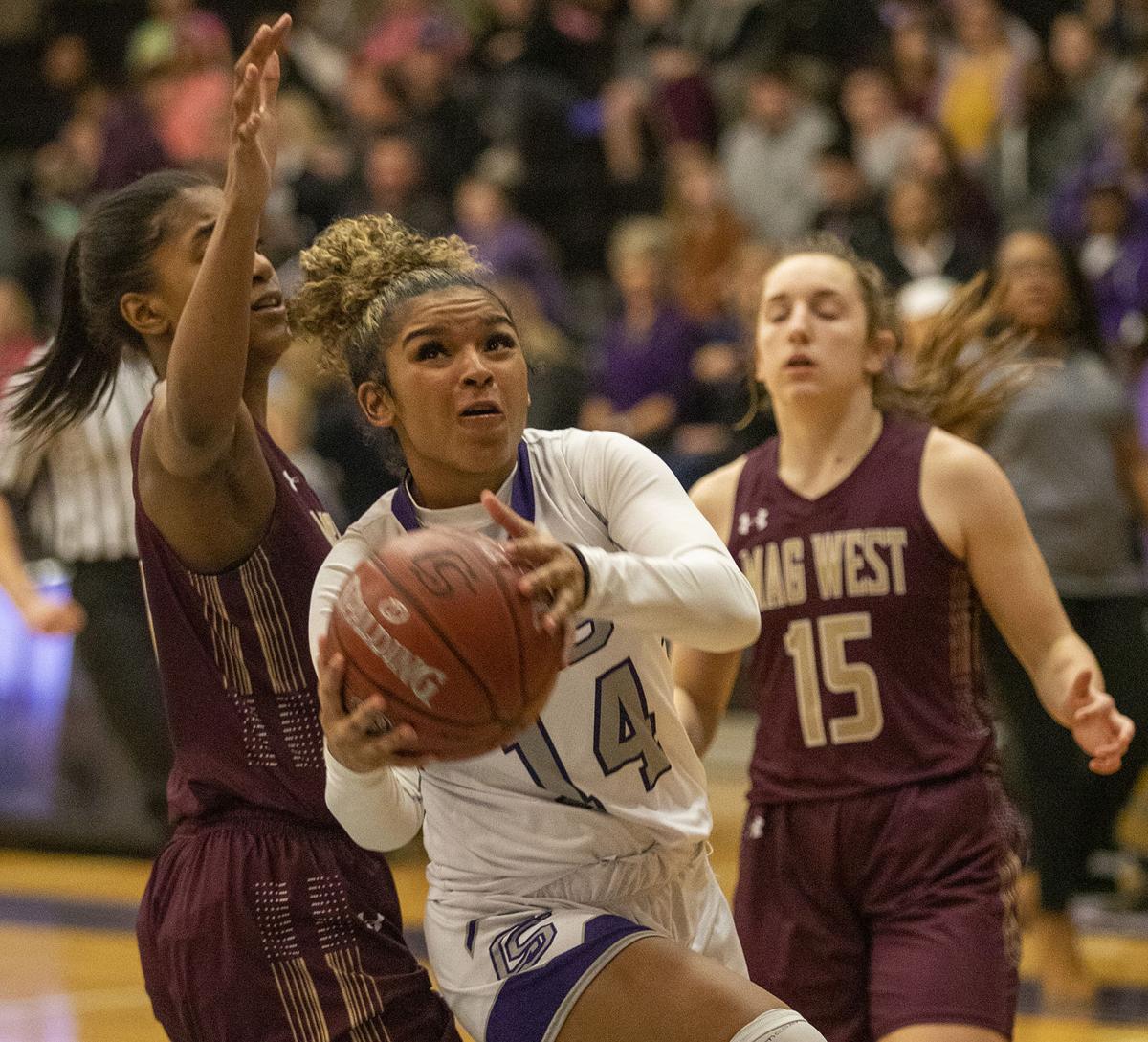 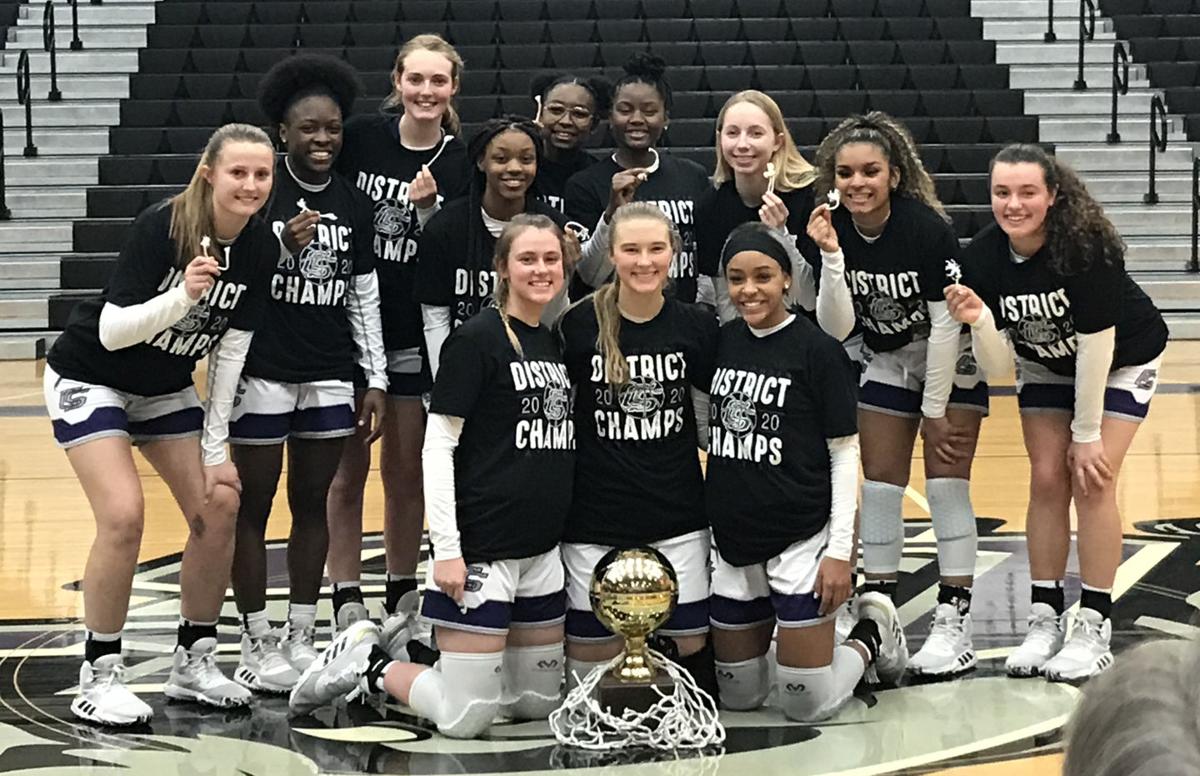 The College Station girls basketball team takes a picture with the District 19-5A championship trophy after beating Magnolia West on Tuesday at Cougar Gym.

The College Station girls basketball team takes a picture with the District 19-5A championship trophy after beating Magnolia West on Tuesday at Cougar Gym.

The College Station girls basketball team used a better first half in its rematch with Magnolia West to win 53-48 and earn its third District 19-5A championship in four years Tuesday at Cougar Gym.

“We knew we had to withstand their pressure, and I thought we did a great job of that early on,” College Station head coach Megan Symank said. “That’s where we struggled and dug ourselves into a hole when we played them over there. Both of us are really good teams, so we knew it was going to come down to the little details, the extra-effort plays, coming down with key rebounds and doing our job defensively.”

@CSLadyCougBball seniors Hadley House, Rebekah Hailey and Mia Rivers, along with their teammates, cut off a piece of the net after the win. pic.twitter.com/MRzvjFzNYH

The Lady Cougars took a 13-8 lead in the first quarter on a 3-pointer from Na’layjah Johnson and a layup from Mia Rivers. Johnson later added another 3-pointer, and Rivers scored on a putback with less than a minute left for an 18-12 lead to end the period.

College Station expanded its lead to 22-14 early in the second quarter, and Magnolia West (28-8, 11-3) used a timeout to regroup. It seemed to do the Lady Mustangs well as they responded with Alyssa May and Kamryn Jones helping them cut the Lady Cougars lead to two.

But with 2:06 left in the period, Jones, who finished with a team-high 19 points, ran into Johnson and Megan Donnelly and fell to the ground clutching her ankle.

With Jones getting checked out on the sidelines, College Station went on a 5-0 run led by Rebekah Hailey that gave the Lady Cougars a 28-21 lead going into halftime.

Magnolia West head coach Darcie Moore said slow starts have been a common problem for the Lady Mustangs, and it happened again Tuesday.

“We didn’t have the best first half,” Moore said. “We’ve got to go back to the drawing board and figure out what our first half woes are. In these last couple of games we haven’t had a great first half. But coming out of halftime we turn it up defensively. You light a fire underneath them and you tell them you have to get back to your roots.”

The Lady Cougars took a 10-point lead with 5:41 left in the third quarter, but Magnolia West, with Jones back in the game, later went on a 10-0 run to get within four.

“It just shows you how tough that kid really is,” Moore said of Jones. “She rolled that ankle pretty hard, and she was able to come back and be there for her team and make a big difference.”

With College Station leading 40-35, both defenses stepped up and held each other scoreless for two minutes and 29 seconds.

Jones broke the silence with a field goal with 4:42 left in the fourth quarter. Later in the period, Jones scored four straight points to get Magnolia West within 42-40, and Kamari Portalis followed with a layup to tie the game after Hailey missed a 3-pointer.

College Station regained the lead with a 6-0 run, forcing Magnolia West to miss two crucial scoring opportunities from Portalis and May, who fouled out with less than 30 seconds left.

From then on it became a contest of free throws, and Johnson hit two big ones to put College Station in front 50-44 with 20.7 seconds left. Rivers and Hailey hit three more foul shots to help secure the victory and district title.

Johnson led the Lady Cougars with 15 points. Hailey had 12 and Rivers 10.

“We’ve been fortunate enough to be able to win a championship in three of the past four years and that says something about our seniors,” Symank said. “Rebekah and Mia have been part of district championships three out of their four years, and that’s pretty special.”

May had 13 points and Portalis seven for Magnolia West.