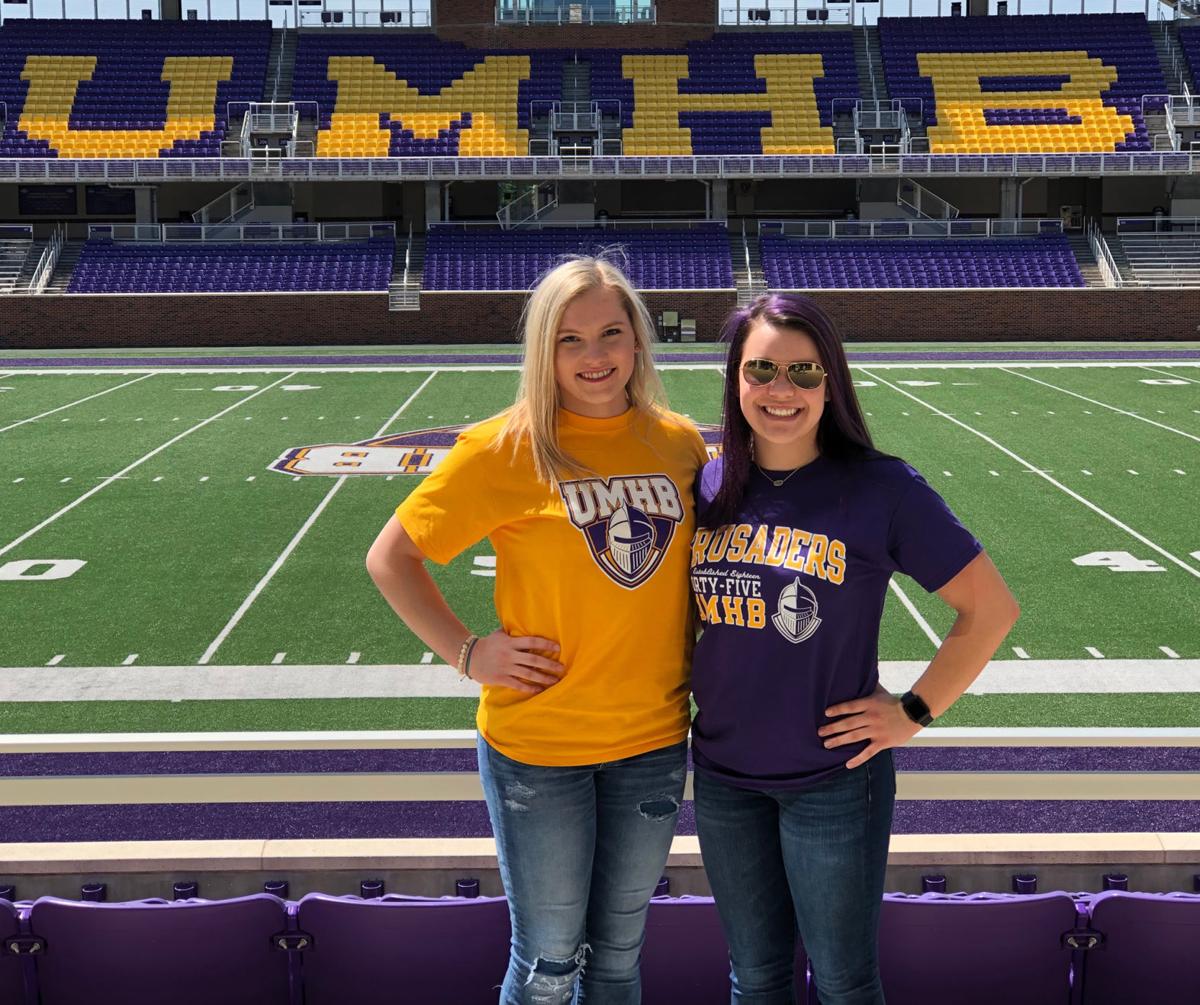 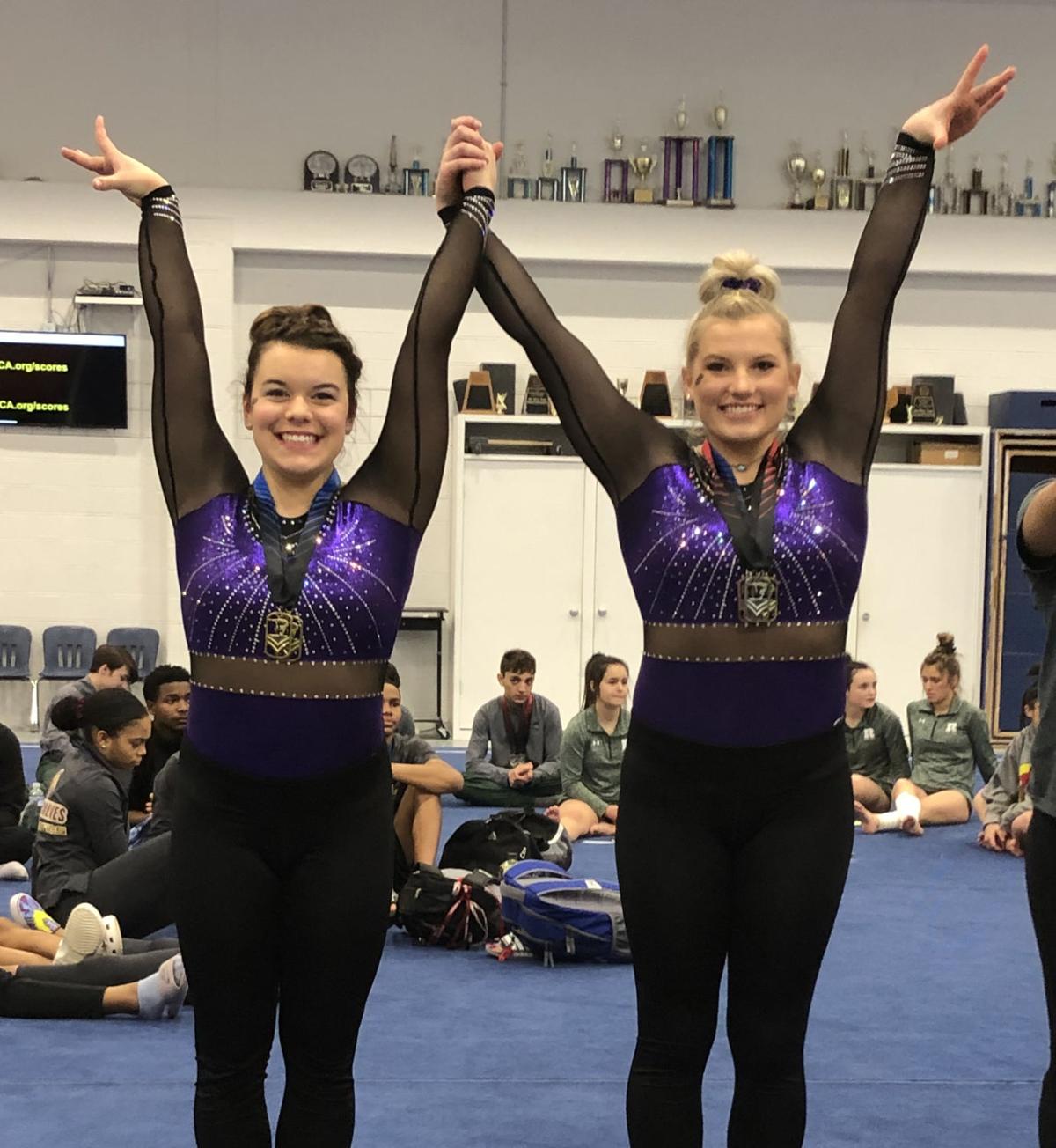 College Station’s senior gymnasts Kalyn Dujka and Katelyn Kolodziejczyk have known each other since fifth grade. The duo has been through injuries and transitions from home school to public school and most recently made program history as the first Lady Cougar gymnasts to sign with a college program.

In fact, when Dujka and Kolodziejczyk walk across the stage at graduation, it won’t be goodbye. Both gymnasts will join Mary Hardin-Baylor’s acrobatics and tumbling team in the fall.

Dujka and Kolodziejczyk said visiting Mary Hardin-Baylor was eye-opening in a good way.

“I always thought I would just go to Texas A&M and A&M is huge, where Mary Hardin-Baylor is so different and a lot tinier,” Dujka said. “Everything is in walking distance. The teachers are more one-on-one, and I really enjoyed that environment. It’s beautiful, too. All the facilities are updated, renovated and it’s really nice. I talked to [head coach Courtney Pate] and she’s super sweet and everything was just working out.”

Both gymnasts want to major in health sciences and hope to become physical therapists. While visiting campus, Dujka and Kolodziejczyk were drawn to the faith-based structure of the university and both see their Christian backgrounds as the foundation of their success in academics and athletics — two things they’ve had to balance from a young age.

For Kolodziejczyk, gymnastics was a way to stay active and have fun.

“When I was younger, I would climb on everything and then my mom put me in gymnastics and I’ve enjoyed it ever since,” Kolodziejczyk said. “It keeps me active. It’s so fun, and it’s just so different from everything. I love going out there and competing and performing, especially during high school gymnastics. It’s so much fun to have your teammates right there with you cheering you on and you cheering them on.”

Dujka said she was born into the sport.

“My mom also did gymnastics and cheerleading growing up, so as soon as she saw me running around, she started spotting me on things and I started flipping in the yard,” Dujka said. “Then I enrolled in a local gym in Brenham where I grew up. When I started getting pretty advanced, I knew I needed to change gyms and I started coming to College Station in fifth grade, and that’s when I met Katelyn.”

Dujka and Kolodziejczyk competed at local gyms and, like many gymnasts who train competitively, they were home-schooled. Kolodziejczyk was the first to enter public school and joined the Lady Cougar gymnastics team as a sophomore. Dujka joined during her junior year after receiving encouragement from Kolodziejczyk to take the leap from individual to team competitions.

“I knew a lot of girls who were on the team, including Katelyn, and she was a big part of me playing high school gymnastics,” Dujka said. “She was keeping in touch with me and telling me how she was doing now that she was going back to public school and that it was a fun experience. It seemed like it was a lot less stressful of an environment and a lot more fun. I mean it’s still serious because you compete to win, but she was a big part of me coming to high school.”

Although it’s a big transition, Dujka and Kolodziejczyk seemed to adapt to the 15-member squad quickly. Kolodziejczyk was selected as co-captain as a junior and senior, and head coach Julie Foght said she’s the biggest advocate for the team and committed to creating a “no woman left behind” mentality. Foght said Dujka’s positive energy encourages the team in its toughest moments and gives younger gymnasts someone to look up to.

“Katelyn has the leadership personality,” Foght said. “She’s good at making sure that practices are going the way they’re supposed to, and if anyone is getting discouraged, she’s really good at encouraging them. Kalyn is definitely a team leader. She’s super positive and a very happy person. They both lead the team by scoring, for sure, but they also lead the team by example.”

The Lady Cougars’ season was cut short due to concerns over the coronavirus. College Station would have held the district meet earlier this week on Wednesday with regionals set for next week and state on May 1-2. For now the season is on hold.

Dujka’s goal for the season was to go full out in the postseason after having to dial it back in the regular season due to a knee injury she suffered last summer. Meanwhile, Kolodziejczyk wanted to reach nationals in Florida for the first time. Both agree that despite this season’s shortcomings, the team was competing well. The Lady Cougars won optional meets — where gymnasts can perform their own routines while following event requirements — at Rudder, the College Station ISD Invitational, Arlington and the Kingwood Klassic before going on the mandated break.

If the season resumes later this spring, Foght said it would be a hard to reschedule meets because of the importance of practicing in a gymnastics gym rather than at home. In the meantime, Dujka is continuing to work out with her family, doing low-impact workouts and resting her knee, while Kolodziejczyk is stretching often and creating new workouts with her sisters.

“If we are able to get them to have a championship meet, how much time is safe to have them in the gym before we put them on the floor to compete because you can’t just not do gymnastics,” Foght said. “I do know that Katelyn and Kalyn are both staying physically fit at home with different workouts, but you really can’t do gymnastics outside of a gymnastics gym safely.”

When the University Interscholastic League initially announced all competitions, practices a…

• Favorite Whataburger order: “My order is so basic. I get the chicken strips!”

• Favorite event: floor — “I love performing my floor routines, and most of my routines in high school have been super fun.”

• Favorite event: vault — “It’s kind of scary if I think about it, but I let my body do what it knows how to do.”

• Favorite song: Here as in Heaven by Elevation Worship