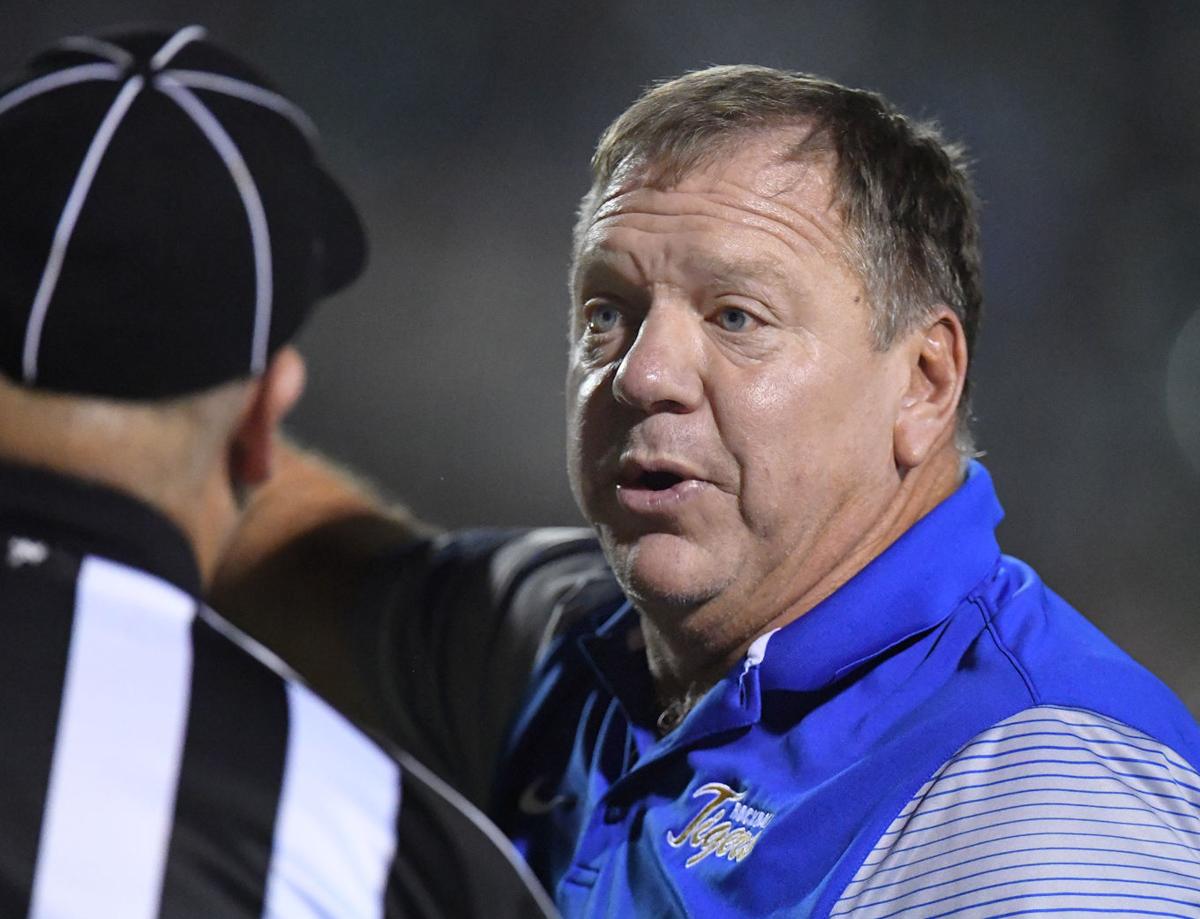 Rockdale head coach Jeff Miller didn’t think he’d be with the Tigers for this long. But as he celebrated his 100th career win at Rockdale, he felt right at home.

“I think 100 wins at one school is a neat accomplishment, but there are so many things that go into that,” said Miller, who was hired at Rockdale in 2006. “Number one, they had to be willing to let me stay that long. The expectation now is that we’re going to be pretty good, and that’s fun now that we’ve gotten that to be our expectation. This is a community project. This isn’t something on me or for me or belongs to me. It took all of us to be able to reach this.”

The Tigers beat Caldwell 44-36 Friday night. The win was extra special as it was the Tigers’ fifth-annual Gold Out game with money raised through T-shirt sales donated to pediatric cancer research charities. The initiative was co-founded by Angel Miller, Jeff Miller’s wife, after their son, Gunner Miller, was diagnosed and treated for bone cancer in 2015.

“It all kind of came to [a head] in ’15 when our son got sick, and that’s really what solidified in our minds how good of a community this was, what they did for our family and for my son,” he said. “They’ve been great to my daughter as well, who’s a senior now.”

The Tigers return a lot of veterans from last year’s squad that went 7-4, and Miller likes the confidence he sees from his team. Rockdale looks to stay undefeated as it travels to face Lexington at 7:30 p.m. Friday.

“Last year we played with a whole bunch of kids that were young and inexperienced and maybe weren’t completely ready for varsity and still had a pretty good year,” Miller said. “But coming back now, most all of them have experience and [they’re] just playing with a lot of confidence and energy and two big wins against two really good 4A programs to start the season.”

Miller wasn’t the only local coach with a milestone win Friday night. Multiple Brazos Valley coaches notched their first wins at their respective schools, and some of them recorded their first-ever wins as a head coach.

Rudder head coach Eric Ezar, who is returning to the sidelines after a stint as Willis’ athletic director, picked up his first win with the Rangers in thrilling fashion, leading Rudder to a 43-42 win over Elgin on Friday at Merrill Green Stadium.

Russell Urbantke, the Madisonville offensive coordinator for three seasons, won his first game as the Mustangs’ head coach, beating Woodville 55-12 Friday night. He got a good performance from running back Roderick Holiday, who rushed for 194 yards and three TDs on 10 carries and defensive tackle Da’Voszia Mock, who finished with 12 tackles and a tackle for loss.

Somerville’s Cal Neatherlin, a longtime assistant across the state, also won his first game as a head coach as the Yeguas took down Waco Texas Wind 24-8.

Iola head coach Kerry Bamburg, Dime Box’s Rick Frey and BVCHEA’s Joshua Ray all won their first games as the head coach of their respective schools and all currently are 2-0.

Upsets of the week: Bremond and Dime Box

Bremond was a seven-point underdog in the Harris Ratings to Thorndale, but the Tigers edged Thorndale 20-18 on Friday night.

Junior quarterback Seth Kasowski had a standout game for Bremond, finishing with 16 carries for 116 yards and a touchdown and completed 8 of 15 passes for 104 yards and a TD.

The Tigers weren’t the only local team to beat the odds in Week 2. Dime Box (2-0), a 45-point underdog to Round Rock Christian, pulled off a dominant 60-14 win.

Ray Gilbert put together another strong performance, rushing for 103 yards and five touchdowns, including a 70-yard kickoff return for a TD. Masyn Spacek and CJ Straughter recorded 10 and nine tackles, respectively, while Nick Gilbert returned an interception for a touchdown. This week, Dime Box is a 45-point favorite over Houston Texas Christian, which it will play at 7 p.m. Friday.

A&M Consolidated (2-0) held steady at No. 6 in Dave Campbell’s Texas Football’s Class 5A Division II rankings after a 49-7 win over crosstown rival Bryan on Thursday night. The Tigers are off this week.

With its win over Thorndale, Bremond checked into the Class 2A Division II rankings in the 10th spot. The Tigers (2-0) look to stay undefeated as they travel to Waco Reicher for a 7:30 p.m. Friday showdown. Burton (2-0) moved up one spot to No. 7 after its 28-7 win over Milano. The Panthers host Class 2A Division I No. 2 Shiner at 7:30 p.m. Friday.

After a bye week, Calvert (1-0) moved up one spot to No. 9 in Class 1A Division II. The Trojans return to action at 7:30 p.m. Friday at Bastrop Tribe Consolidated.

All week, Rudder’s focus was on playing for safety Gage Schwartz and quarterback Brant Rober…