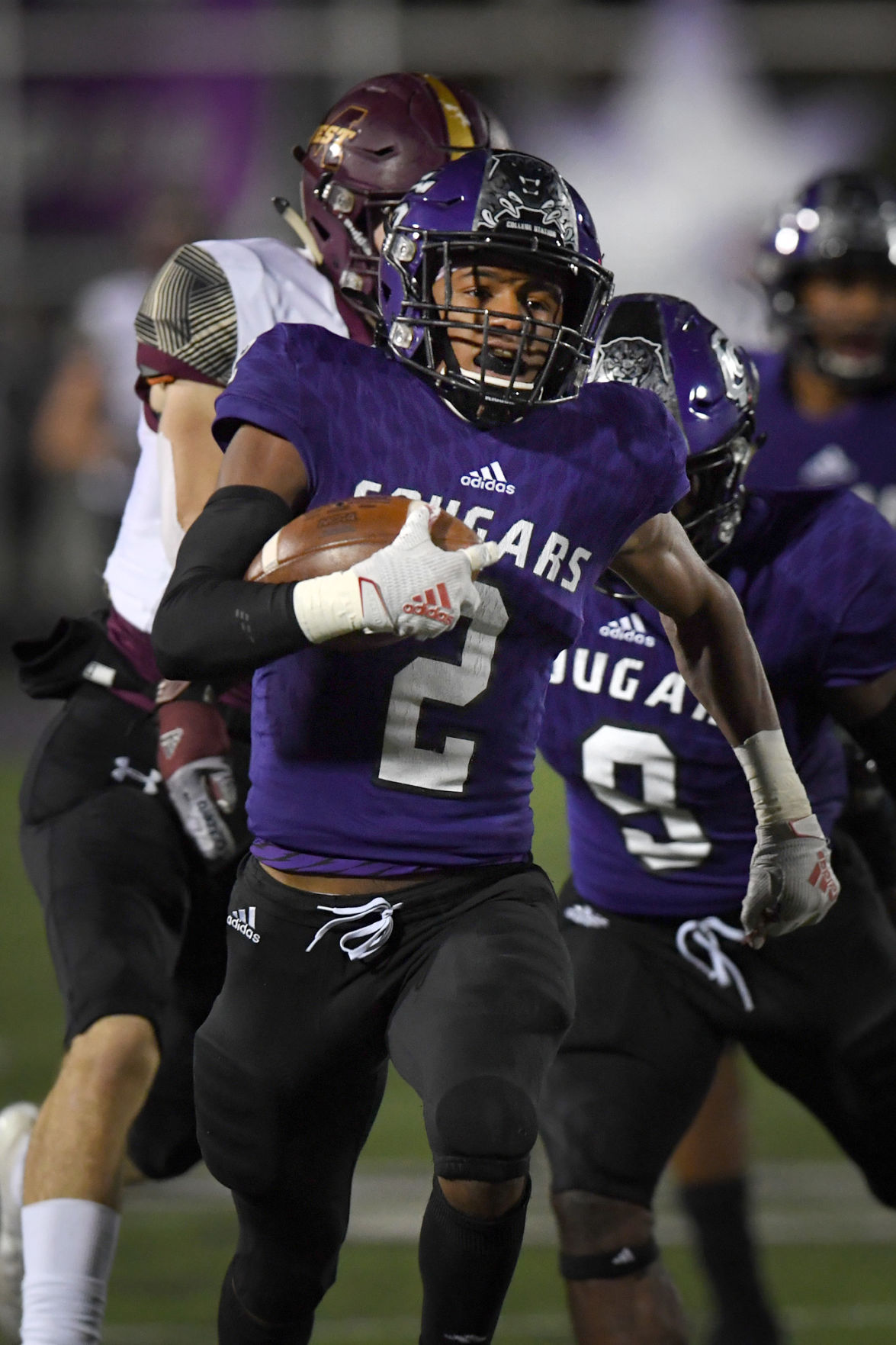 College Station's Khebrian Rumph (2) runs the ball into the end zone on a blocked extra-point kick during the first quarter of Friday's game against Magnolia West at Cougar Stadium. 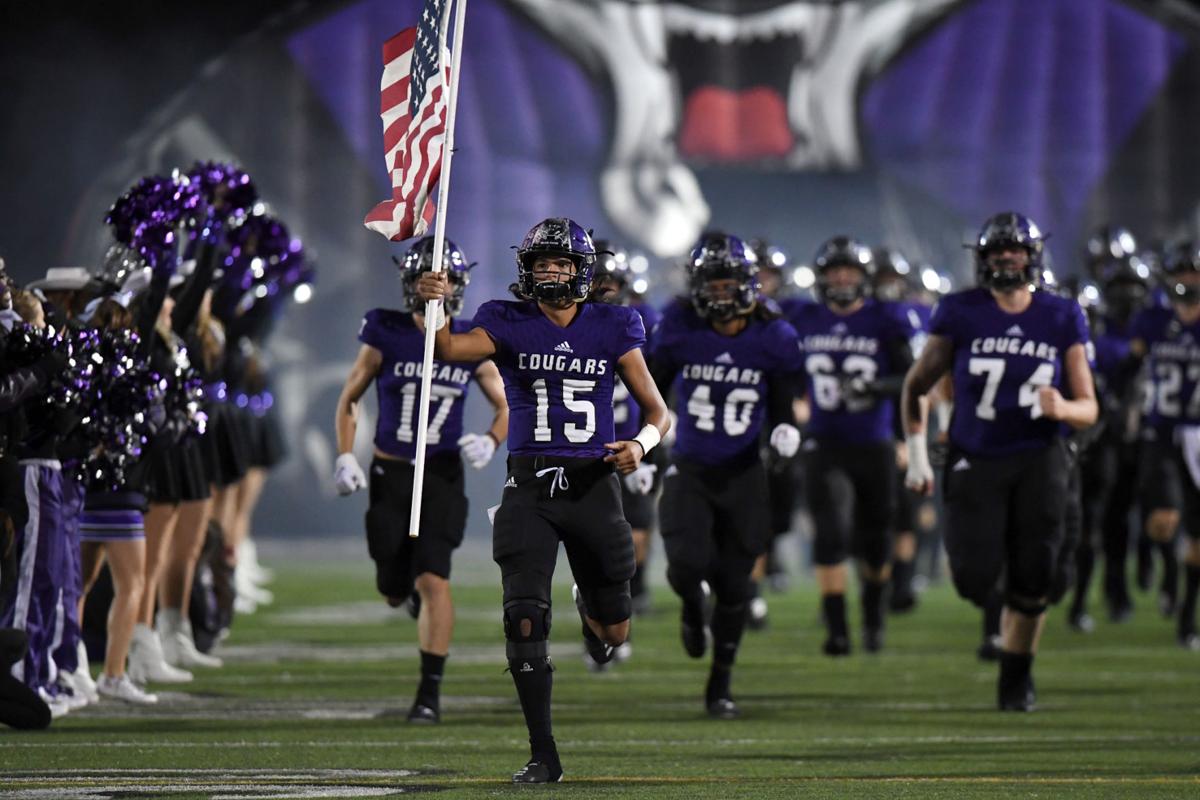 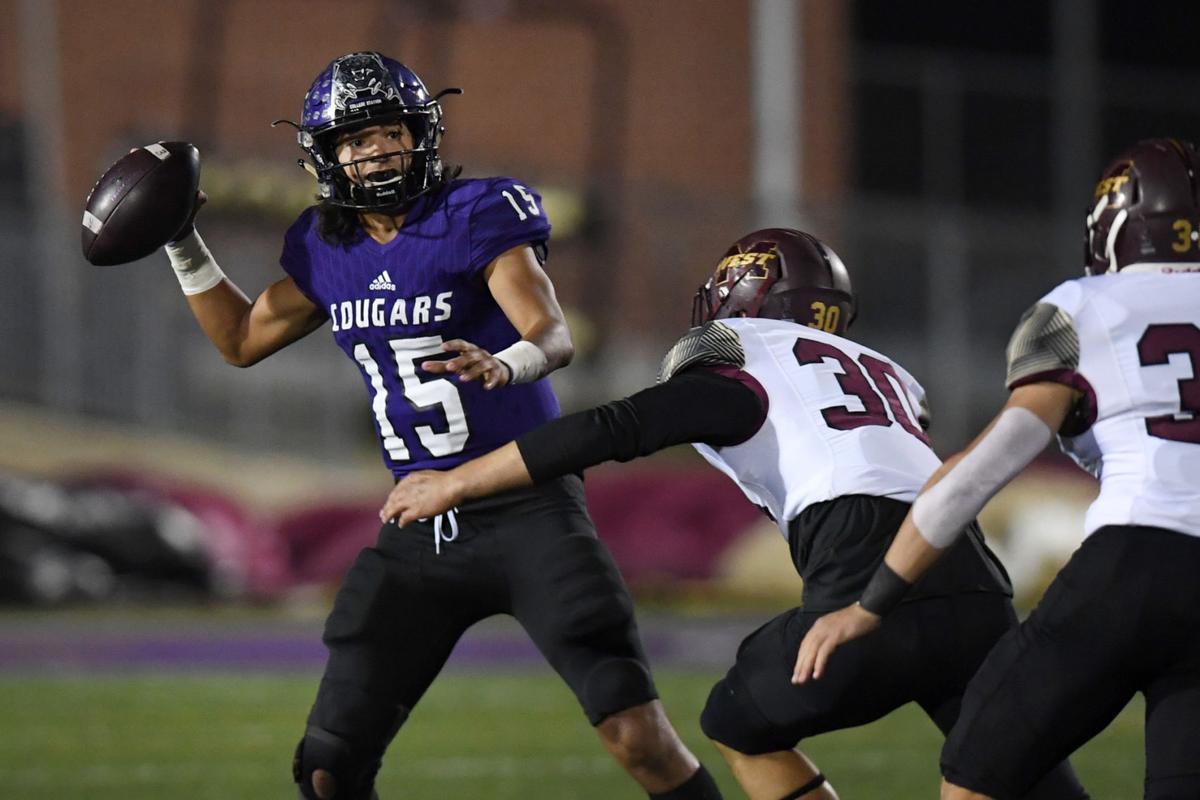 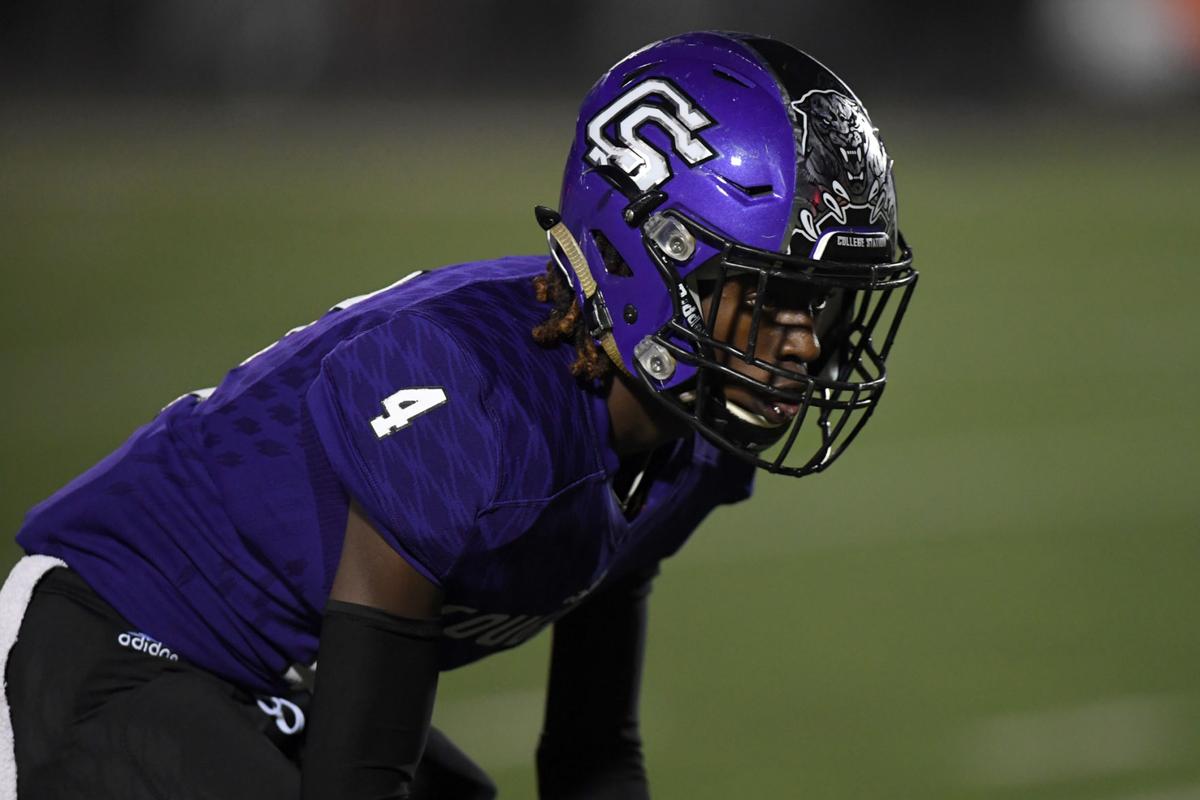 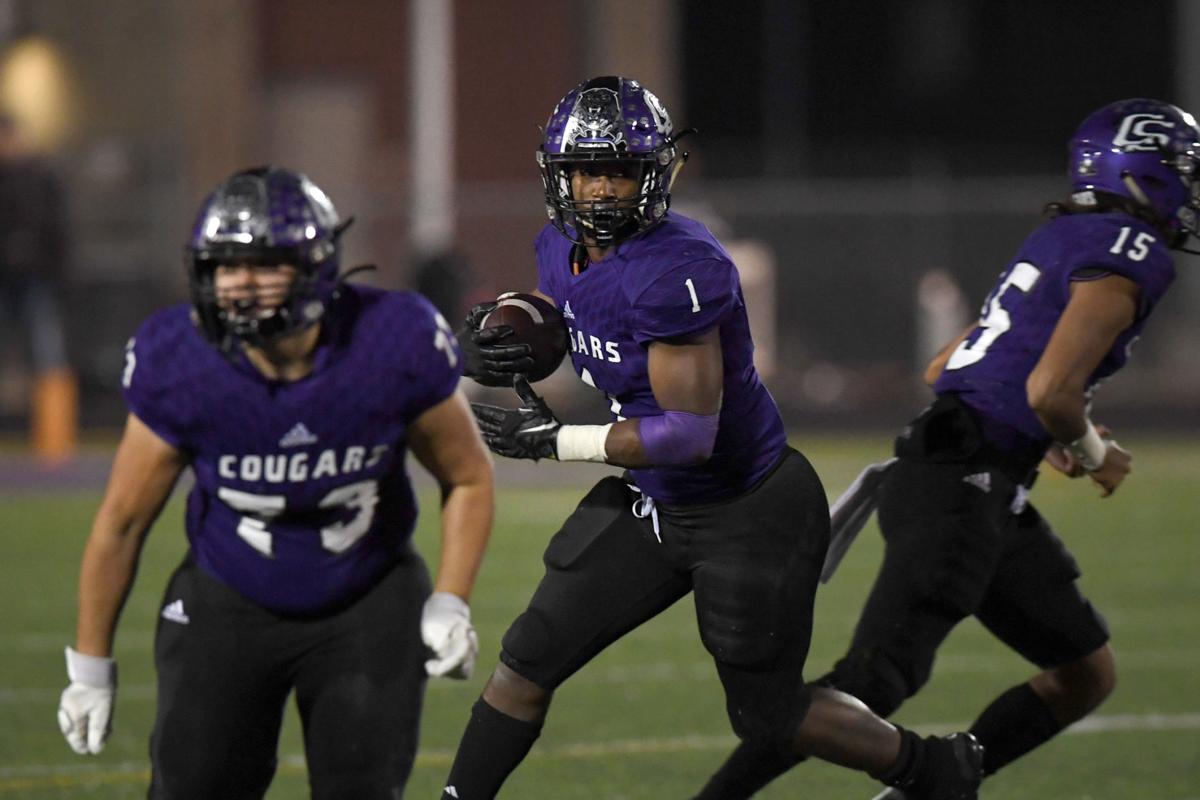 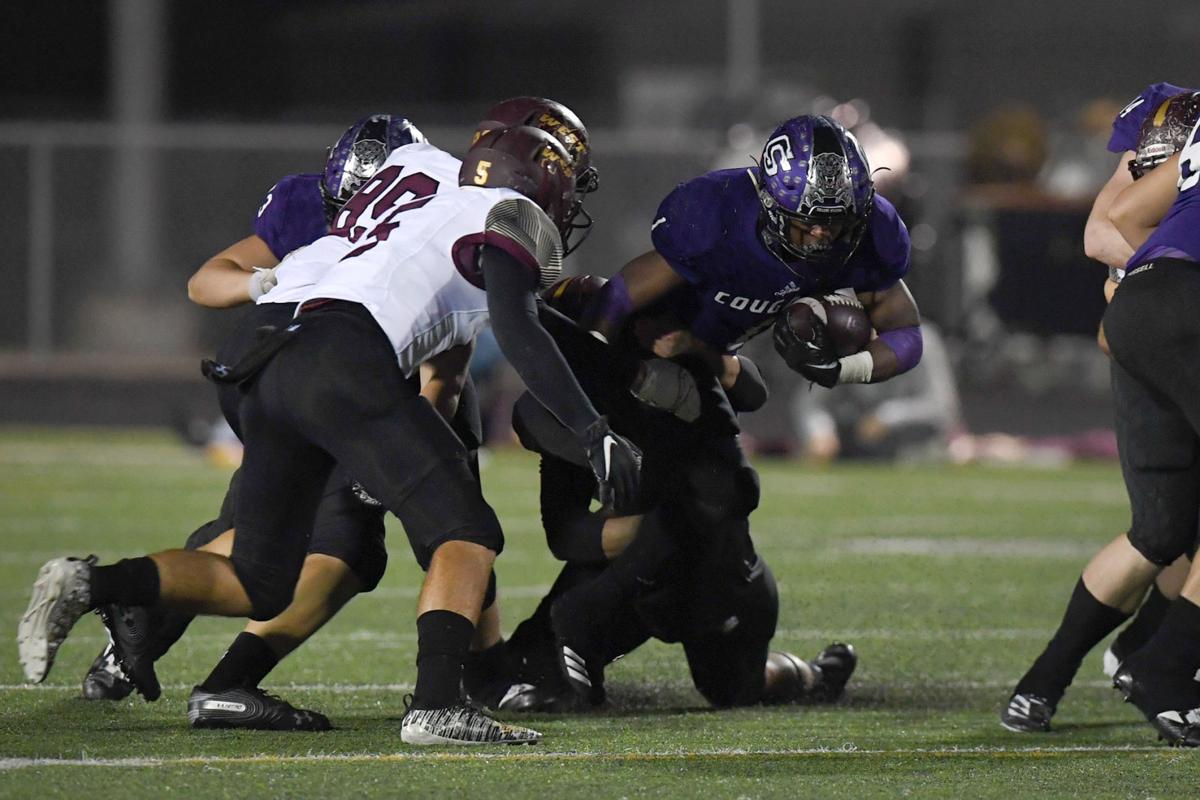 College Station's Khebrian Rumph (2) runs the ball into the end zone on a blocked extra-point kick during the first quarter of Friday's game against Magnolia West at Cougar Stadium.

In the most crucial moments in the most important game of their season, the College Station Cougars proved they could step up to any challenge after coming back from a 25-point deficit to beat Magnolia West 37-30 in District 8-5A Division I football action Friday at Cougar Stadium.

Austin Sosa scored on a 1-yard run with 1:32 left to help College Station (7-3, 5-2) secure second place in the district. The Cougars will host a bi-district playoff game next week against an opponent to be determined. The Mustangs finished the season 5-5 overall and 4-3 in district.

Magnolia West came out of the gates swinging. On its fourth play of the game, running back Hunter Bilbo scored on a 66-yard run. The Mustangs scored again almost four minutes later when quarterback Brock Dalton connected with Marcus Collins for a 52-yard TD pass. Bilbo led Magnolia with 24 rushes for 151 yards, while Collins had five receptions for 76 yards. Dalton completed 20 of 34 passes for 199 yards.

College Station salvaged two points out of Magnolia West’s fast start when defensive back Khebrian Rumph blocked Jeffrey Krop’s extra-point kick after Collins’ TD catch and ran it back 92 yards to cut the Mustangs’ lead to 13-2 with 6:10 left in the first quarter.

“One of the biggest plays, when you look at the whole thing, is that block PAT return for two,” College Station head coach Steve Huff said. “It was huge.”

Magnolia West built its lead to 27-2 on Dalton’s 26-yard TD pass to Krop and his 11-yarder to Collins with 41 seconds left before halftime.

The Cougars got another big play in special teams on the kickoff following Collins’ second TD pass when Dalton Carnes ran it back 99 yards for a score. College Station missed a two-point conversion and trailed 27-8 at halftime.

“We didn’t execute very well in the first half, but we told the kids ‘if we just go out ... we’re going to return the second half kick — just go out the second half and get a score,’” Huff said. “That was a huge kickoff return for a touchdown right before halftime to get a little momentum swing.”

Senior running back Kolbe Cashion continued College Station’s comeback with a 58-yard TD run just 35 seconds into the second half. After Cashion went down twice in the first half with minor injuries, the Cougar sideline appeared relieved to see him return in a big way.

“He’s one of the heartbeats of our team and one of our captains,” Huff said. “He got roughed up a little bit, and I’m sure he’ll be pretty sore tomorrow, but I imagine this win will overtake any soreness.”

Roderick Brown drew College Station within 27-22 with a 6-yard TD run with 7:30 left in the third quarter.

Krop kicked a field goal later in the third quarter, but the Cougars tied the game at 30 on Cashion’s 6-yard TD run and a conversion pass with 7:43 left in the game. Cashion finished with 86 yards on 10 carries.

Sosa then put College Station ahead for the first time with his short TD run for a 37-30 lead.

Photos from the football game between College Station and Magnolia West at Cougar Stadium on Friday, Nov. 8, 2019.