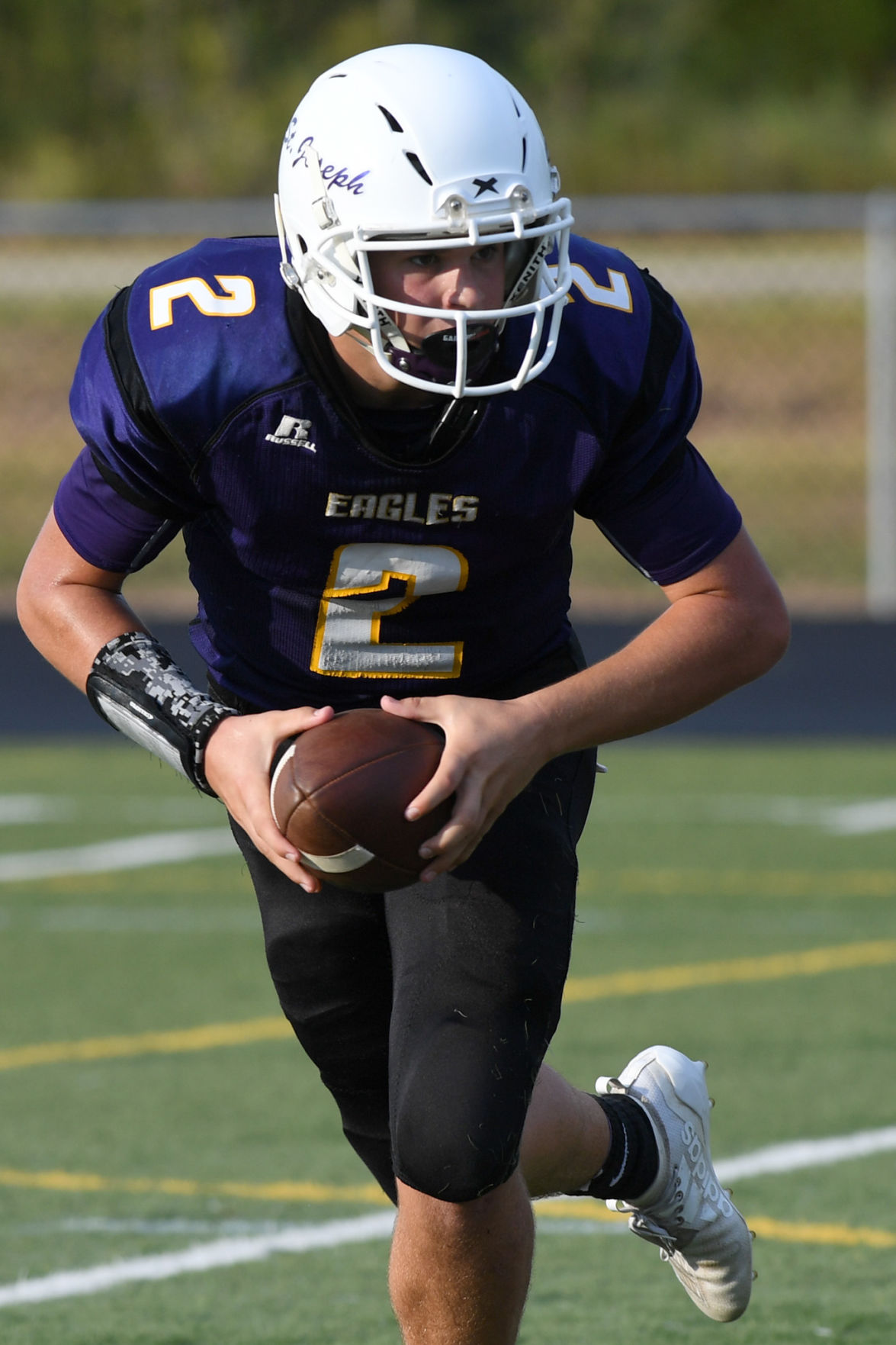 Trace Brightwell looks to throw in a nondistrict game against Calvert in August. Brightwell threw for 345 yards and six touchdowns in a 52-50 victory over Trinidad on Saturday.

St. Joseph may have allowed the most points it has all season against Trinidad, but the number in the win column is what’s most important. The Eagles edged Trinidad 52-50 in a nondistrict game on Saturday. The close win comes after two weeks in which the Eagles lost by a combined four points, dropping district contests to Conroe Covenant Christian (34-32) and Allen Academy (33-31)

With his 345-yard performance, Trace Brightwell surpassed 1,000 passing yards on the season and now sits at 1,205. He completed 22 of 31 passes and threw six touchdowns, three each to Evan Lawrence and Matthew Nelson. Nelson also was among St. Joseph’s leaders in receiving yards, catching nine passes for 113 yards, while Reid Millhollon caught five passes for 155 yards.

Many of those players also had an excellent evening on defense. Nelson and Twister Barrington co-led St. Joseph (5-3, 1-2) with eight tackles apiece, while Brightwell had five. Barrington recovered two fumbles while Nelson forced a fumble. Brightwell recorded an interception, his fifth of the season, tops in the Brazos Valley.

That defense has been solid all season, allowing an average of 23.6 points per game, including a streak of six or less in nondistrict games against Temple Holy Trinity (55-6), Victoria Faith Academy (61-6), BVCHEA (50-0).

For whom will The Bell toll?

Playoff positioning is on the line Friday night, and the 92nd Battle of the Bell between Cameron and Rockdale is sure to be an offensive showdown of epic proportions. Rockdale hosts Cameron at 7:30 p.m. Friday at Tiger Stadium.

One of the most exciting #txhsfb matchups in the Brazos Valley is this week. #iykyk https://t.co/nLEWnoygAj

Both teams come into the game with identical 6-1 records and are 2-1 in District 10-3A Division I, each with a loss to Troy. Two years ago, Rockdale beat the Yoemen 63-34 en route to the Class 3A Division I title, but Cameron returned the favor with a 33-14 win last year. The Yoemen lead 63-26-2 all-time in a series that dates back to 1911 and has been played every year since 1957.

Both teams feature talented quarterbacks in senior Braden Brashear for the Yoemen and junior Jace Robinson for the Tigers as well as a bevy of talented receivers such as Rockdale’s Ross Loth and Kesean Raven and Cameron’s Kobe Young and Zakorien Spikes. The running game also could take center stage with three outstanding backs in Cameron’s Nico Vargas and James Debose and Rockdale’s Cam’ron Valdez.

All three local teams in the Dave Campbell’s Texas Football rankings remained in the polls.