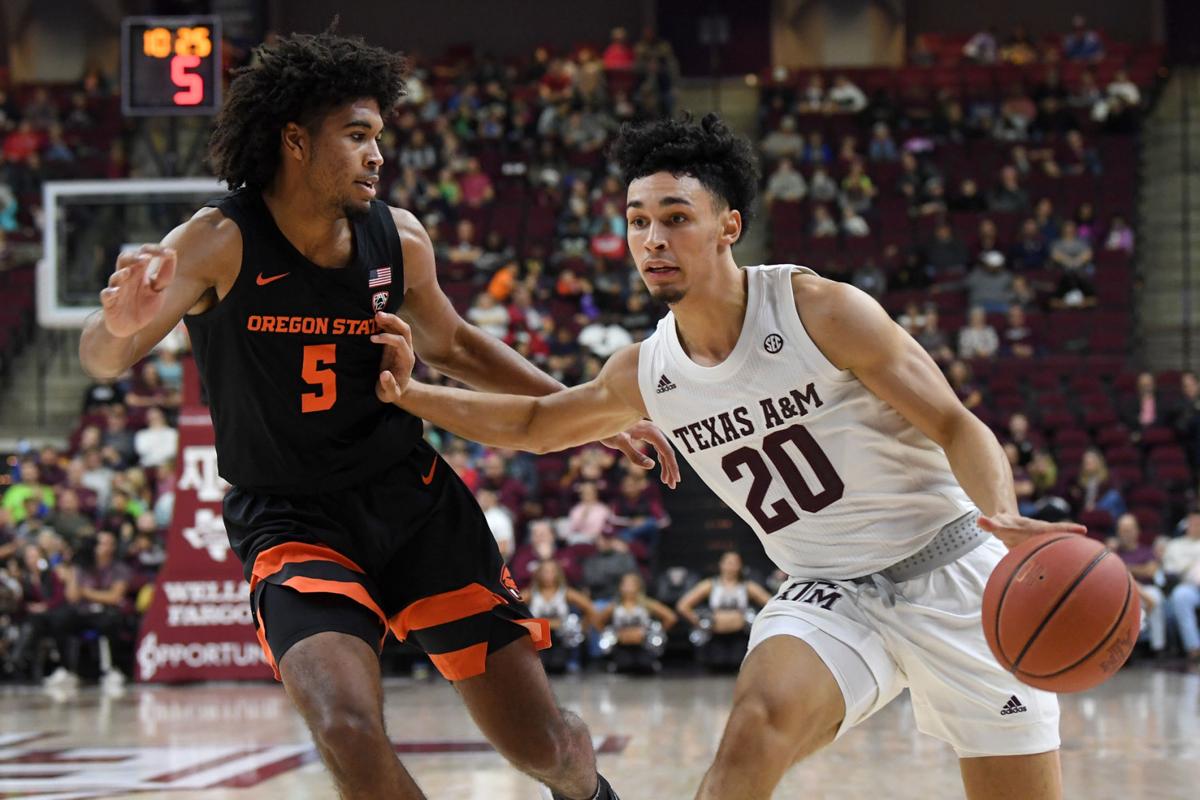 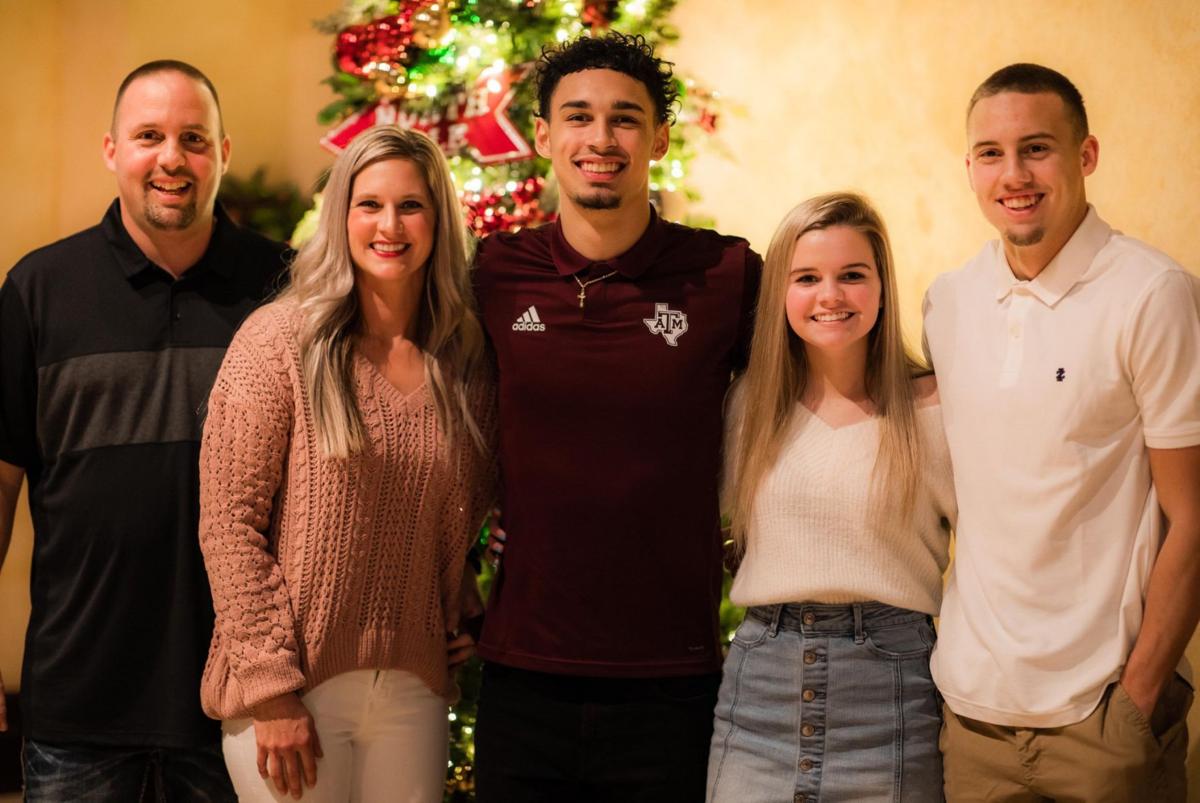 Texas A&M freshman Andre Gordon, center, spent much of his time growing up in Sidney, Ohio, with the Perry family: Johnny, from left, Nichole, Breonna and Cameron.

Texas A&M freshman Andre Gordon, center, spent much of his time growing up in Sidney, Ohio, with the Perry family: Johnny, from left, Nichole, Breonna and Cameron.

Before Thanksgiving, Texas A&M men’s basketball head coach Buzz Williams issued homework for his team. Each player was tasked with writing a note to someone for whom they are thankful.

Freshman guard Andre Gordon had two people in mind, Johnny and Nichole Perry. Biology boasts no bond between them, but they consider themselves family nonetheless.

“If I didn’t have them, I probably wouldn’t be here today,” Gordon said. “I would probably be on the streets doing something dumb that I shouldn’t be doing, still in Sidney, Ohio, probably working a factory job or something, which is not what I wanted.”

On Saturday, the Perrys will be among about 60 of Gordon’s family and friends making the five-hour drive from Sidney to Nashville, Tennessee, to see their town’s favorite son play college basketball as A&M takes on Vanderbilt. It’s an improbable journey, according to those close to Gordon.

Sidney, the 21,000-population seat of Shelby County, lies 40 miles north of Dayton, Ohio, and 85 miles west of the state capital Columbus. The Honda engine plant seven miles north of Sidney employs a majority of the town’s inhabitants. Whether it’s Friday evenings at a Sidney High School football game, Shelby County Applefest or the county fair, Sidney is a slice of small-town America. It earned the All-American City Award in 1964 by the National Civic League.

By the time Gordon reached the fourth grade, word of his athletic ability had spread around town. High school football coach Adam Doenges heard the stories, which he thought ridiculous about a boy so young, so he ventured into a local gym to catch a basketball game.

“You immediately figured out who he was,” Doenges said. “You just watched him play and I said, ‘That kid right there, we’ve got to make sure he plays football when he gets to high school. I know he’s a basketball kid, but we’ve got to stress to him that football can also be a sport that he can play at the next level.’”

At the time, Gordon was far from an All-American kid. The aggressive child frequently found himself kicked out of school. Johnny Perry described Gordon as a “troublemaker” and “bully” at that time. He was often separated from his single mother, Tracy Williams, and his three siblings.

“I was not the best kid growing up,” Gordon said. “My parents didn’t really want me around their kids and stuff.”

It wasn’t until Gordon befriended Cameron Perry, Johnny’s son, during pee-wee football practice that his life found structure. One fun sleepover turned into two, then Johnny Perry realized Gordon was spending three to four nights a week at their home.

As a local business owner, Johnny Perry has the means to give his family a comfortable lifestyle. But he said he grew up in a situation much like Gordon’s, which Gordon said sometimes involved receiving gifts from local toy drives at Christmas. So Johnny Perry and his family quickly realized they had the opportunity to help a kid in need and provide a jump start to Gordon’s future success.

Before long, Gordon had his own room in the Perry household and mandated rules that went with it.

“I look at him like he’s my kid,” Johnny Perry said. “He has the same stuff as my kids have as far as materialistic things. I told him in the beginning, ‘If you do the right thing, I will always help you.’”

The Perrys helped Gordon get onto some of the area’s best club basketball teams and traveled on the road with him to his tournament games. They also taught him how to add maturity to his natural talent.

During one basketball tournament game, Gordon got in a disagreement with his coach. In a fit of rage, he threw down his jersey and left the gym. Perry’s wife, Nichole, gave him the tough love he needed at the time, Johnny Perry said.

“She said, ‘We don’t do this. You get back in there and you put your jersey back on and get back on the bench with your team. We don’t care who is wrong and who is right — you don’t do that.’ So he grabbed his jersey and went back to the bench,” Johnny Perry said.

Through sports and the Perrys’ guidance, Gordon’s reputation changed.

“A lot of coaches were like, ‘If you want to play, you have to stop being kicked out of school and doing all the negative stuff,’” Gordon said. “So I just focused on that, and that kind of put a little hair on my chest.”

While Gordon’s first love was basketball, he also turned into a standout quarterback for Sidney. The Yellowjackets have a proud if not always successful history, Doenges said. During his junior year, Gordon led Sidney to a 10-2 record and the program’s second state playoff berth. That season, he threw for 1,546 yards and 18 touchdowns, while rushing for 682 yards and 13 scores. He managed all this success a year after recovering from surgery on a broken left wrist.

“He’s a tremendous athlete,” Doenges said. “He’s a tremendous learner. He’s unbelievably coachable. He’s got infectious energy every day at practice, and he’s ready to compete. Great leadership qualities. He was a lot of fun to be around, there’s no doubt about it, and made a lot of us look like really good coaches.”

“He was dunking on people in junior high,” Wiloughby said with a laugh. “With his love of the game and, in basketball, the way he went after it and the way he understood the game, you could see [college basketball] was in his future.”

After his junior year, with the support of the Perrys, Gordon transferred to national basketball powerhouse Hunnington Prep in West Virginia. He moved back to Sidney after a semester, wanting to be back with his friends and a biological brother who was just released from jail, he said. But before he left, he had the opportunity to meet then Virginia Tech assistant coach Jamie McNeilly, who offered him a scholarship to play under head coach Buzz Williams.

Soon after, Williams traveled to Hunnington, West Virginia, to meet Gordon and then hopped a plane to Sidney to meet with the people who raised Gordon, the Perrys. In a conference room in Sidney’s tiny airport, Johnny Perry realized Williams was the right man to take over his mission of raising Gordon.

“Right when I met him, five minutes in, I knew that’s the guy,” Johnny Perry said. “Part of life is becoming a man. There is one thing that Buzz Williams will do. He’ll teach you basketball and teach you how to be a man.”

The Perrys took Gordon’s official visit to Virginia Tech then again traveled with Gordon to College Station after Williams took his new post with the Aggies. It wasn’t the school but Williams that had Gordon’s commitment, and the family would have followed the coach overseas if need be, Johnny Perry joked.

In his first season of college basketball, Gordon has been vital to the Aggies. With already short depth at point guard and the early season transfer of guard TJ Starks from the program, Gordon has taken on the burden of running Williams’ offense. Heading into his 12th college game at Vanderbilt with a streak of three consecutive starts, he is averaging 6.7 points, 2.4 rebounds and 1.7 assists a game.

Saturday’s game will be Tracy Williams’ first opportunity to watch her son play college basketball and the first time she will meet Buzz Williams.

“I love guys who’s story says you’re not supposed to make it,” Buzz Williams said. “I cheer for those guys and, for whatever reason, seem to always have near immediate connections with them and their people.”

Sidney resides in the heart of Big 10 Conference country with basketball powerhouses spread in every direction. But thanks to one of the town’s all-time talents turning his life around, you can find maroon A&M gear walking through the town square, Doenges said. Needless to say, the SEC Network is now a mainstay in Sidney, he said. When Gordon returned home for Christmas to visit both his birth family and the family that chose him, he was stopped everywhere to take a picture or sign an autograph, Johnny Perry said. But that’s nothing new to the athlete who has been signing autographs in his hometown since high school.

“He’s a legend,” Wiloughby said. “He’s going to be forever in Sidney records and be in the talk for being the best athlete or best player all-time in Sidney, that is for sure.”

And all signs point back to the Perry family as the reason why the once troubled kid is now a leader with the Aggies.

“The people that are in his sphere, I stand at the utmost attention for what they’ve done and how they went about it,” Buzz Williams said. “They will end up being a part of my family for the rest of their lives.”

NASHVILLE, Tenn. — Its best first half of the season shooting the ball since the opener carried the Texas A&M men’s basketball team to a 6…

As Texas A&M entered the first media timeout in its Southeastern Conference men’s basketball matchup with Vanderbilt on Saturday, the Aggi…