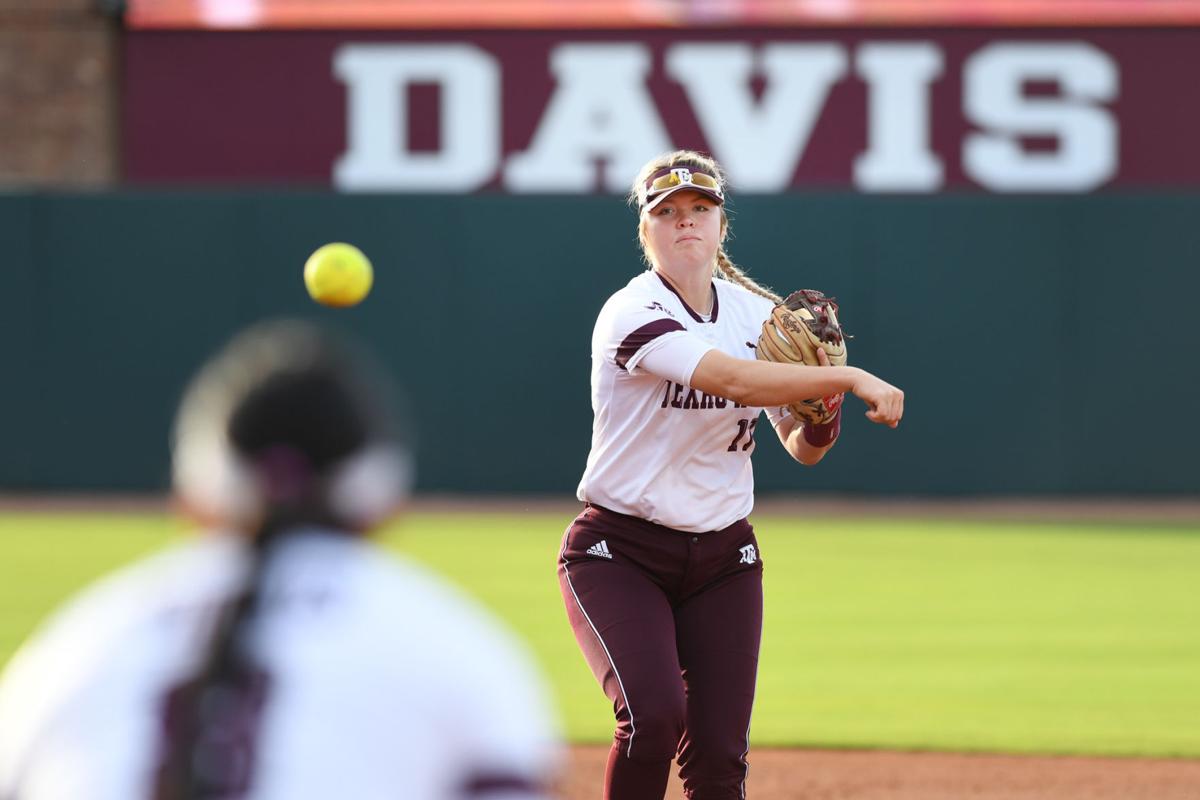 Texas A&M's Kristen Cuyos (17) throws to Tori Vidales (8) at first base in the second inning against Auburn Friday at Davis Diamond. 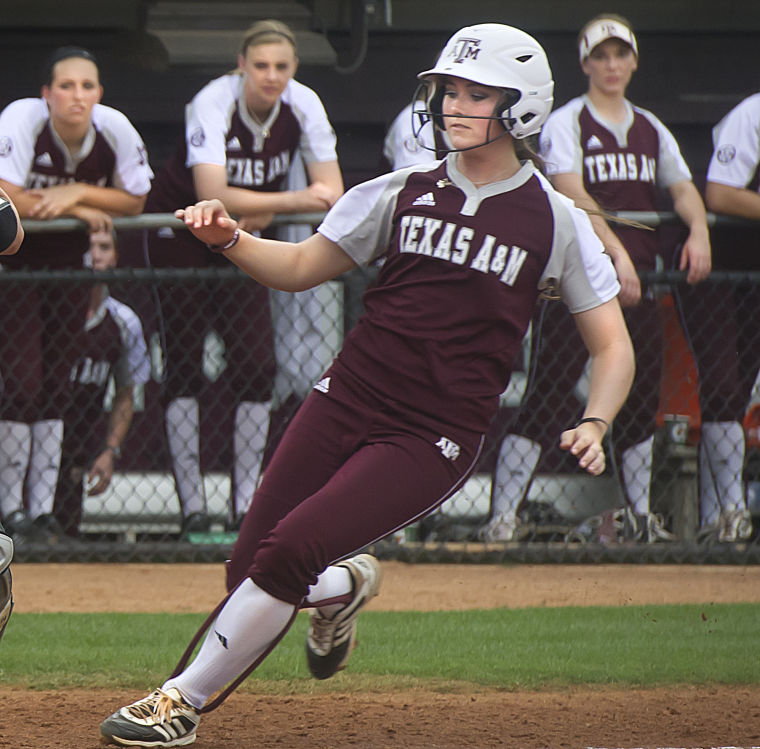 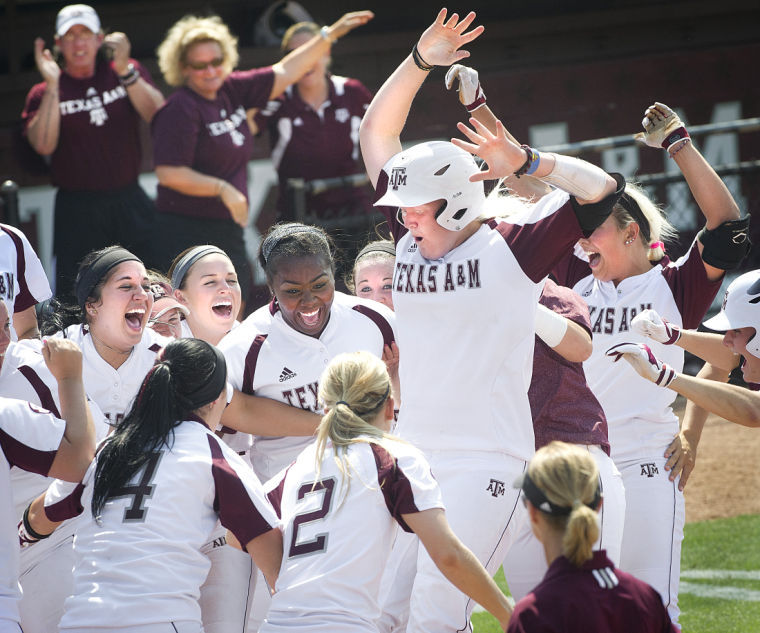 Texas A&M's Nicole Morgan leaps on to home plate her walk-off home run gave the Aggies a 6-5 win over the Lady Bears. 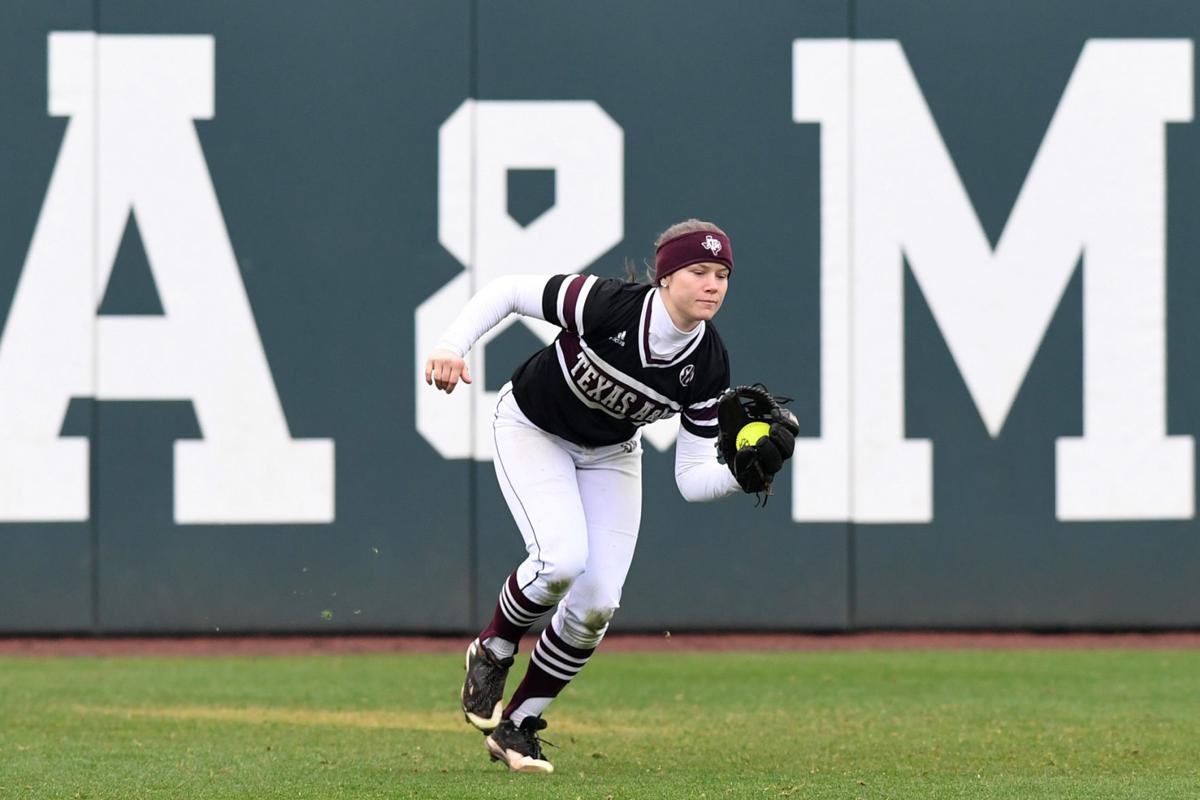 Texas A&M's Erica Russell catches a liner in the outfield earlier this season against Texas Tech.

Texas A&M's Kristen Cuyos (17) throws to Tori Vidales (8) at first base in the second inning against Auburn Friday at Davis Diamond.

Texas A&M's Nicole Morgan leaps on to home plate her walk-off home run gave the Aggies a 6-5 win over the Lady Bears.

Texas A&M's Erica Russell catches a liner in the outfield earlier this season against Texas Tech.

May ranks first in school history in home runs (69) and slugging percentage (.748). She’s also second in RBIs (189) and walks (168) and batted .323 over her career. She earned second-team All-America honors in 2010 with an unbelievable freshman season when she batted .405 with 24 homers, 62 RBIs and a .945 slugging percentage. After the season she was involved in a head-on car crash that flipped her car four times. She recovered to hit at least 14 homers in each of her last three seasons despite undergoing multiple surgeries because of the accident and other injuries.

Villarreal, a rare left-handed middle infielder, was the Big 12 Conference’s defensive player of the year in 2009 and ’11. She batted .301 for her career with power, hitting 45 doubles (sixth in school history) and 19 homers and driving in 111 runs. She scored 156 runs to rank sixth in school history and her 334 total bases is 10th. She batted .333 as a sophomore in 2009 to lead the team but missed the 2010 season because she was academically ineligible. She didn’t show any rust when she returned, hitting .335 as a junior — second best on the team. She played in 233 games, all starts.

The four-year starter had range, power and durability. Cuyos’ 467 assists rank fourth in school history, and she hit 43 home runs, which ranks seventh, to go with 153 RBIs over 237 starts. Her best season came in 2017 when she earned second-team All-Southeastern Conference honors by hitting .277 with 11 homers and 42 RBIs.

Sartain earned third-team All-America honors in 2017 when she batted .350 with 11 doubles, 13 homers and 49 RBIs. Sartain hit the go-ahead three-run homer in a 5-3 victory over Tennessee in 2017 to win their Super Regional series and send A&M to the Women’s College World Series. She batted .289 for her career with 37 homers and 136 RBIs over 232 starts. She moved to shortstop her last season. Her 436 assists rank sixth in school history.

Harrington went 34-20 with a 2.58 ERA. The Colorado State transfer had a rocky start at A&M, going 7-9 in 2016 with a 3.86 ERA, giving up a homer every 10 innings. She blossomed into the team’s ace the next two seasons, going 27-11 with a 2.11 ERA. She pitched a complete game against Tennessee in 2017 to clinch the Super Regional series. The next season she came within an out of beating Florida and sending the Aggies back to Oklahoma City.

Alderink batted .318 for her career with eight homers, 26 doubles, 85 RBIs, 84 walks and 35 stolen bases. The three-year starter didn’t miss a game and made 181 straight starts but transferred to Louisiana-Lafayette.

Morrow was a four-year starter who played only one season in the 2010s, hitting .264 with 16 RBIs as a senior. She had a stellar career with a .271 batting average over 188 starts with nine homers and 94 RBIs. She gets the second-team nod over two other A&M shortstops — Taran Tyler, a slick-fielding three-year starter who hit only .244, and Brittany Walker, a Florida transfer who batted .293 with 15 extra-base hits over two seasons but didn’t stick around for her senior season.

Hudek batted .329 in two seasons with 12 homers and 67 RBIs. She was an excellent fielder who had 104 putouts and four assists with only three errors. She transferred to Louisiana-Lafayette after her sophomore season.

Russell batted only .235 but was a pitcher’s best friend. The former Bryan Lady Viking had 276 putouts and 14 assists, routinely robbing opponents of base hits with her diving catches. She capped her career with an errorless senior season. She had some pop at the plate, too, with 14 career doubles, six homers and 48 RBIs.

Danielle Adams, who led the Texas A&M women’s basketball program to its only national ch…